MOUNT OLIVE- The age old saying, “it’s in my blood” is certainly relevant to University of Mount Olive (UMO) incoming freshman Kayla Frazier. After all, her dad, Marvin, went to Mount Olive back in 1989. Her uncle, Jeffery Harrison, is also a member of the University’s first four-year graduating class.

“Being so familiar with UMO definitely made my college choice easy,” she said.

Frazier’s journey leading up to her enrollment at UMO, however was far from effortless. It required organization, time management, and a great deal of “burning the midnight oil.” As the valedictorian of Farmville Central High School’s 2019 graduating class, Frazier describes her trek to the top as a challenging, yet rewarding feat. “I always give 100% in everything I do, including school,” she said.

Staying true to her motto of giving it her all, Frazier kept a hectic academic and athletic schedule all throughout high school. She strived for straight A’s in every class, contributed over 400 hours of volunteer service in several school clubs, and was an active member of the Pitt County Community Schools and Recreation volleyball team. As a result of her hard work, she was presented with academic achievement awards, as well as medals for her expansive volunteerism. However, Frazier admits that the greatest reward was receiving her place as valedictorian. “I was so thankful and a little emotional,” she recalled at receiving the honor.

With high school just a distant memory, Frazier is looking forward to the next chapter in her academic career. The 18-year-old moved into her college dorm on Saturday, August 24. She plans to major in Business Administration. “I choose administration because I want to be able to use my leadership skills to help others,” Frazier explained.

Recognizing that some of her father’s strongest relationships were built at UMO, the Farmville native is excited to get to know her fellow Trojans. “My dad met his best friend at UMO,” she said. “Hopefully I’ll also make long lasting friendships with students and professors.”

“I am happy that my daughter is attending a university that I believe fits her personality well,” Marvin said. “I know that from my own experience at Mount Olive, that everyone treats you like family.”

Hearing stories of her father’s college glory days, Frazier is looking forward to making her own memories. “My dad loves to tell me about the athletic tournaments he competed in and how the cafeteria was once located downtown,” she said. “I am thrilled that I will soon be swapping college stories with him.”

Frazier plans to join several clubs including Phi Beta Lambda and CAB, as well as participate on the university’s intramural volleyball team. “I want to be as involved on campus as my dad was,” explained Frazier. “He played JV basketball, was in the Honors Society, and was a Resident Assistant. His time at Mount Olive really made a positive impact on his life. I hope to have an equally positive experience as I gain more independence, earn a solid education, and hopefully become a strong leader.”

Frazier is the eldest daughter of Marvin and Beth Frazier. She has a younger sister, Kristin. The Fraziers attend Marlboro Original Free Will Baptist Church in Farmville. 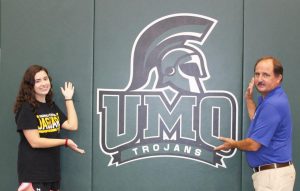 UMO incoming freshman Kayla Frazier and her dad, Marvin, pause for a photo on move-in day in front during of the UMO athletic logo.  Marvin attended Mount Olive College back in the late 1980s. 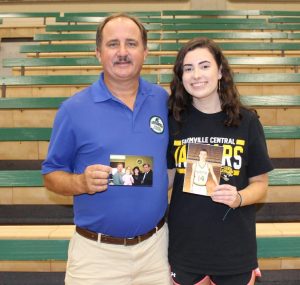 UMO incoming freshman Kayla Frazier is pictured holding a photo of her dad, Marvin, when he was a student at Mount Olive College back in the late 1980s. Marvin holds a photo of himself; his wife, Beth; his daughter, Kayla; and Former Mount Olive College President the late Dr. Burkette Raper. The photo was taken many years earlier when the family visited the College. 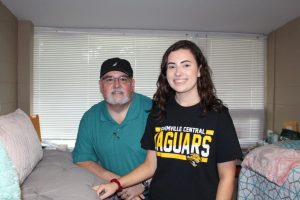