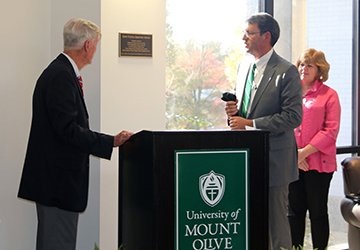 MOUNT OLIVE – Gary Fenton Barefoot’s name and legacy will forever be a part of the fabric of the University of Mount Olive (UMO).

Barefoot’s longstanding connection to UMO started in the mid-1950’s when he enrolled as a student and later earned his associate’s degree from the institution.  Barefoot retired from the University in 1999 after a 34-year stint as Director of Library Services, but continues to work part time at the institution as curator of the Free Will Baptist Historical Collection and the University Archives.

To honor Barefoot’s work and legacy, Robert’s Grove Original Free Will Baptist Church and several of Barefoot’s friends and family members contributed to the naming of the Atrium, the beautiful second floor glass encased space that connects Moye Library and the Communications Building.

Instrumental in helping facilitate the naming opportunity was Barefoot’s friend and former co-worker, the late Jean F. Ackiss. Before her death in the spring of this year, Ackiss was quoted as saying, “Gary has been an inspiration to so many people since coming to work at the University in 1965. He is most deserving to have this beautiful atrium in the library bear his name.”

On Saturday, November 29, a ceremony was held to honor Barefoot and unveil the plaque naming the atrium in his honor.

“The University of Mount Olive celebrated its 70th anniversary during our Founders Day service this past Tuesday,” said UMO President Dr. H. Edward Croom. “Today, we honor Gary Barefoot who has been a part of the fabric of this institution most of those years.  We are delighted to name our atrium in his honor thereby serving as a permanent reminder of his dedication, his wisdom, and his connections.”

Croom said he has had a lot of special occasions over the past year and a half, but that one of the best has been getting to know Barefoot.  “This is a special day to us,” Croom said.  “The dedication is well deserved and long overdue,” he said.

With Barefoot standing next to him, Croom unveiled the plaque bearing Barefoot’s name.

Following comments by Croom and Ricky Warren, Pastor of Robert’s Grove OWFB Church, Barefoot joked that he didn’t know who they were talking about.  “If I was in the market for a job, I would know who to ask for a reference,” he said.

Barefoot said he was in awe of the gesture and support, and since hearing of it he had thought about why such a good thing should come to him.  He recognized his friends, family, church family, his good health at age 82, knowledge, time, special abilities, and possessions as all being from gifts from God.  “Instead of having any feelings of entitlement, to all these blessings I have tried to respond with genuine gratitude,” he said.

Beyond his work with the FWB Historical Collection, Barefoot also volunteers his time in many church, civic, and community organizations.  He is the organist at Robert’s Grove OFWB Church.  Having been a member of the Exchange Club of Mount Olive since 1973, he is the only remaining charter member, and has served in every office, except treasurer.  He was a member of the Mount Olive Jaycees for 12 years. He also volunteers his time to help with the Mount Olive Christmas parade, the North Carolina Pickle Festival, and Read to Succeed, an organization that helps teach elementary children to read.  During the Christmas season, Barefoot can be spotted ringing the bell for the Salvation Army and on July 4th he helps the Mount Olive community celebrate Independence Day.

Barefoot enrolled in Mount Olive Junior College in 1957 earning his associate’s degree in 1959.  He continued his education at UNC-Chapel Hill earning his bachelor’s and master’s degrees.

Barefoot began working as a public school librarian, but returned to Mount Olive College in 1965 has head librarian of Moye Library — a position he held for 34 years. During that time Barefoot oversaw the transition of the library from two rooms on the original campus on North Breazeale Avenue to its current location. Under his guidance book volumes grew from 8,000 to more than 60,000. He also helped convert the library from its original manual operation to a more-modern technology-based system. A native of Spivey’s Corner, Barefoot has had an extensive career in the field of library services.  He is most well-known for his work on the Free Will Baptist Historical Collection, housed in the Communication Building at UMO. It is the largest known repository of Original Free Will Baptist materials.

“Gary is a walking, talking reservoir of knowledge about all things Mount Olive College, UMO, and the Original Free Will Baptists,” Croom said. “If he does not know the answer by heart, he will find it for you.  So, today as we stand in this atrium that connects Moye Library to the second floor of the Communications Building, which houses he Free Will Baptist Historical Collection, it is only fitting that we honor the man who has made such a mark on this institution for more than 64 years.”

Barefoot said he often ponders what his life would have been like if the late Dr. Burkette Raper, former president of Mount Olive College, had not visited his home in late August of 1957 to offer him a $250 annual scholarship to attend the college.  He had already been accepted into the N.C. State University School of Design, but after the visit, chose to attend Mount Olive.

Barefoot said, “That visit, that day altered the course of my life forever. As Robert Frost, one of my favorite poets once said, ‘Two roads diverged in a wood, and I took the one less traveled by, and that has made all the difference.’” 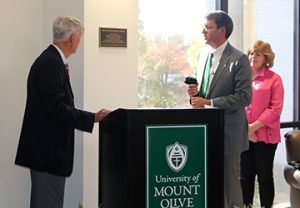 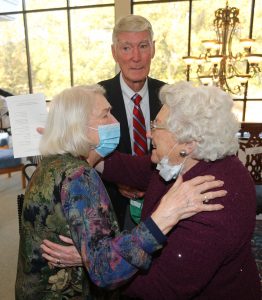 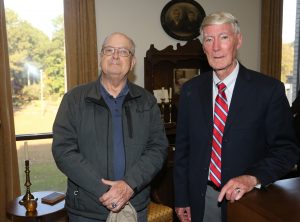 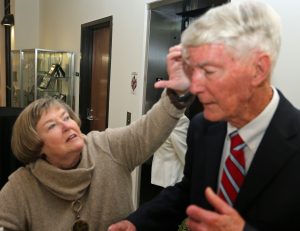 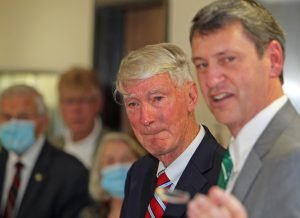 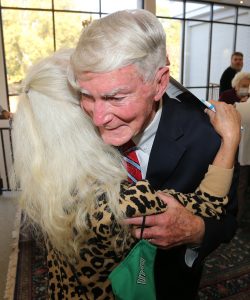 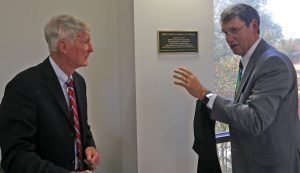 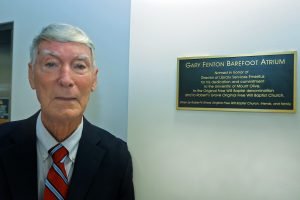