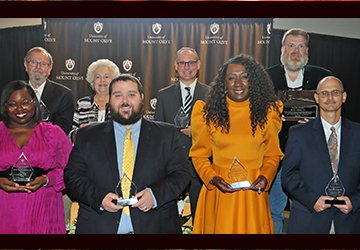 MOUNT OLIVE-The University of Mount Olive (UMO) Alumni Association recently honored eight alumni for their outstanding service, contributions, and achievements.  The awards were presented during the Alumni Awards Ceremony held in Rodgers Chapel.  The event was part of the University’s Annual Homecoming celebration.

Scott Winslow, from the Class of 1996, received the Tillman Business Award.  Winslow’s wife, Shannon, introduced him and shared his personal story of growing up on a farm in Eastern North Carolina. Shannon noted, that as the youngest child, Winslow was often called on to help his family.  “He therefore developed his entrepreneurial spirit at a young age,” she said.

Winslow is co-founder and co-managing partner of Nabell Winslow Wealth Management.  He is also the co-founder and Chief Executive Office of Partner’s Square Consulting.  Winslow has over 25 years of experience advising individuals and businesses specializing in retirement income planning, custom portfolio management, tax planning, and other advanced markets.

Winslow graduated from MOC with a bachelor of science degree in business administration and a concentration in business management.   While at UMO, he played on the men’s soccer team.

Carolyn Jernigan, from the Class of 1964, received the Lifetime Achievement Award.  Jernigan’s son Tim, from the Mount Olive College class of 1989, introduced his mother for the award.  Tim gave an emotional testimony regarding his mother’s service to Shady Grove Original Free Will Baptist Church, the University of Mount Olive, her community, and her family.

Jernigan has served in numerous capacities within the Original Free Will Baptist denomination.  She has also served on the University of Mount Olive Board of Trustees for almost 30 years. As a former educator, Jernigan know the importance of education and how it can form a person’s future. “Her tireless efforts to help UMO and her church are appreciated and reflected in this prestigious award,” Tim said.

Billy Kornegay, from the Class of 1966, received the Lifetime Achievement Award.  Kornegay was born and raised in Mount Olive and was a member of the last graduating class of Mount Olive High School. After attending the University of Mount Olive, he served our country as a member of the US Air Force Reserve. In 1979, after working in several other positions, he started his own company, Eastern Wrecker Sales, which he still runs today.

Kornegay has continued to serve his community as a member of several local boards and has served on the Big Rock Blue Marlin Tournament Board of Directors since 1982. Kornegay has served on the UMO Foundation Board since 2013, a position in which he has been a tireless advocate for the University.

Barry Staton Toole, from the Class of 1983, received the Lorelle F. Martin and Michael R. Pelt Excellence in Teaching Award.  Lorelle Martin was Toole’s biology teacher when he attended Mount Olive College back in the early 1980s. The two shared a special bond. As a result, Toole has utilized some of Martin’s teaching techniques with his own students. Traits like helping others see the value of education and learning new things.

Barbara Lee, from the Class of 2008, with the Lorelle F. Martin and Michael R. Pelt Excellence in Teaching Award.  Lee started at Jones County Senior High as a business, finance, information technology teacher. She soon added graduation coordinator and senior class trip coordinator to her job description. Lee also founded a club entitled Proper Etiquette and became the Career Development Coordinator and Special Populations Coordinator. She has since moved to the Jones County Board of Education where she serves as the Career & Technical Education Director and Instructional Management Coordinator for the entire county.

During the awards ceremony, it was noted that Lee often shares her UMO story with students in Jones County. “Barbara constantly pushes students to reach their full ability,” said the award presenter. “Her dedication to her students and her community has led to many honors and recognition. Barbara embodies what Ms. Martin and Dr. Pelt wanted for graduates of UMO.”

Eric Godwin, from the Class of 2011, received the Young Alumni Achievement Award.  Dean of the School of Agriculture and Biological Sciences, Dr. Sandy Maddox, introduced Godwin as someone who has never stopped giving of himself and investing in those around him.

As a student, Godwin was involved with multiple activities and a student leader.  After graduation, he began his teaching career and is currently a department lead and mentor to new teachers. Godwin has also published his first book which focuses on how transformative interactions can make the world a more positive place.

“While doing all of this, Eric has also started a scholarship that he funds for new agriculture teachers,” Maddox said.  “He understands the importance of giving back and paying it forward.”

Aisha Christa Atkinson, from the Class of 2013, received the Young Alumni Achievement Award.  English professor, Dr. Linda Holland-Toll, introduced Atkinson as one of the most intelligent students she has ever had. As the valedictorian of her class at UMO, Atkinson received numerous awards and honors and is now in her eighth year of teaching.

“Aisha has continued to earn praise and recognition as a teacher as she educates students in English Language Arts, and more specifically has been recognized for her work with English as a Second Language students,” said Holland-Toll.

Toll stated that while Atkinson has done so much, she is sure the best is yet to come.

Bryan DeBose of Wilmington, NC was recognized for his service to alumni and students during his term as the Alumni Association President from 2018-20.

DeBose graduated from UMO in 2011 with a bachelor’s degree in business management.  Since that time, he has served the Alumni Board in several capacities including Secretary, Vice President, President Elect, and President.  He has participated in numerous committees including Homecoming, Winter Glitz, and An Evening with UMO.

Having worked in sales most of his adult life, DeBose understands the importance of building and maintaining relationships. He also believes in the importance of giving back. “I believe it is important to give back to the University of Mount Olive both financially, as well as with your time and participation,” he said.

DeBose, and his wife Sabra, reside in Wilmington. 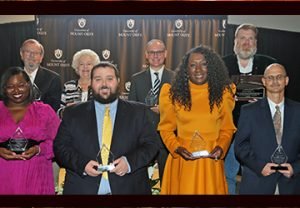