One of Woodard’s coworkers said, “It has often been said that one’s character is built during times of dramatic test or crises.  While this can be true for many, I also believe that one’s character is shown through how they live their lives on any ordinary day.  I have been blessed to work with a man whose character is one that exemplifies others above self every single day of his life.  A man who leads by example.  A man who has faith that can move mountains, and whose smile is infectious to all those around him.  This man is Tim Woodard.”

“To receive the J. William Byrd award is truly indeed an honor,” Woodard said.  “UMO is one of the best universities in the country, and that is an attribute of all the people who work here.  For me to be awarded the J William Byrd Award, seems surreal.  I am truly blessed to work at such a great institution.”

Woodard began working at Mount Olive College in 1987, right after he graduated from the institution.  He is Director of Admissions.  Woodard, and his wife Joy, are the proud parents of three children Ryne Woodard, Maggie Banks, and the late Brittany Woodard. He is the son of Eddie and Peggy Woodard.  Woodard attends Rains Crossroad Free Will Baptist Church, where he serves as a deacon.  He is also a member of CACRAO.

“UMO is more than a job or a college for me,” said Woodard.  “It is family.  The UMO family is made up of so many people from so many different walks of life, but they all have the same common core qualities – they have a loving and caring nature for each other and for mankind.  I feel UMO equips students with strong academic skills, but more importantly UMO instills values that last a lifetime.”

Benefactor of the J. William Byrd Staff Excellence is Dr. Thomas R. Morris, a long-time friend and generous supporter of the University of Mount Olive. Dr. Morris is a native of the Nahunta area of Wayne County where he and his family were active members of Union Grove OFWB Church.  With the vision of an education, he worked his way through the University of North Carolina at Chapel Hill. Upon graduation from medical school, he was an optometrist and civic leader in Goldsboro until his retirement.  He now resides in Wilmington. 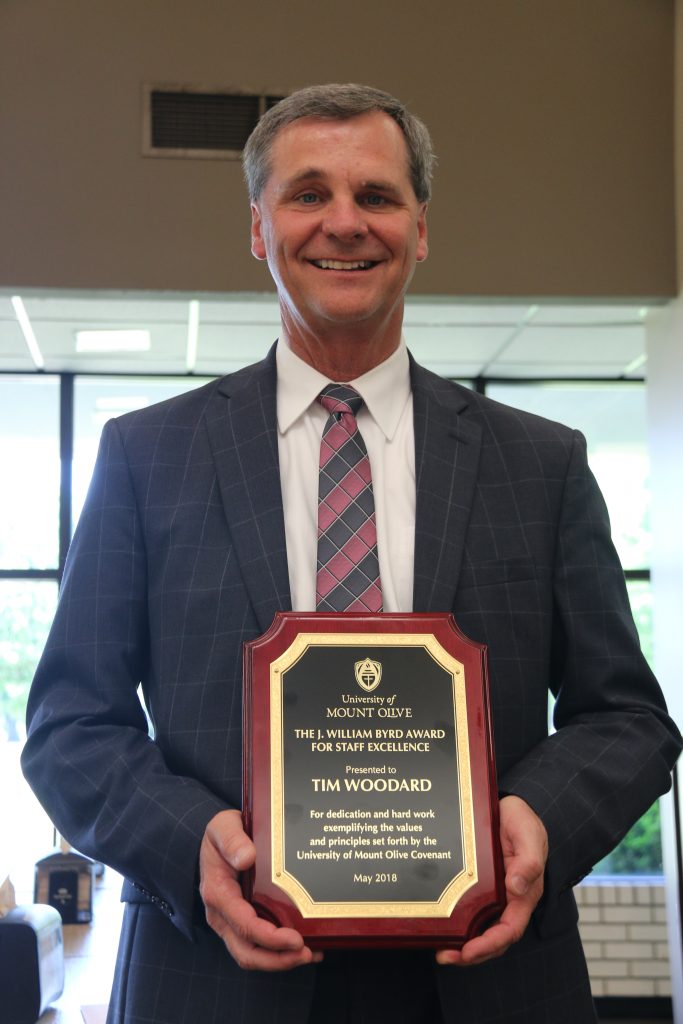 One Second After to be UMO Common Read