MOUNT OLIVE – “People sometimes ask about how I became a nurse, and the truth is that I did not really choose to be a nurse, rather nursing chose me,” said Clinton Middleton, a bachelor of science in nursing (BSN) alumnus from the University of Mount Olive (UMO).

Middleton, of Franklin, Ohio, was 23 when he began his nursing career.  He started LPN school with a childhood church friend who did not want to go to nursing school alone.  He agreed to go, and stumbled onto a path that would shape the rest of his life.

“Growing up poor, a professional job like nursing seemed to be so far out of reach,” Middleton said.  “Most of the people that I knew growing up worked in factories or performed manual labor.  In addition to poverty, after a feverish bout with measles, I was also challenged with profound hearing loss.”

Middleton’s mother arranged for him to get hearing aids.  He did not want to wear them, thinking everyone would see him as different.  However, after returning to school, his teachers noticed an immediate impact.  “I had previously been described as ‘slow’ and a child that “did not listen or follow directions,’ ” Middleton recalled.

Once his hearing was corrected, Middleton’s teachers realized that he was not daydreaming in class.  Rather, his inattention was a result of deafness.  When Middleton applied to start nursing school, he was told that he could not be accepted unless he underwent an evaluation to determine if he could hear well enough for financial aid to be allocated towards his nursing education.  “I was told that I was better suited for other jobs, most of them a skilled trade, or manual labor,” he recalled.  However, Middleton persisted with his goal and started a LPN program, despite recommendations to do otherwise.

After LPN school at the Butler County Joint Vocational School in Hamilton, Ohio, Middleton worked mostly in long-term-care.  He later discovered travel nursing was a great way for a young nurse to see the world.  “My nursing journey took me to Connecticut and California, and exposed me to different people and communities,” he said.

With a desire to continually climb higher in his chosen profession, Middleton took part-time online classes with Excelsior University.  He eventually earned his associate degree in 2008.

By 2009, Middleton was married.  He and his wife left Ohio and embarked on a new journey in North Carolina.  They had a dog and a newborn.  Middleton began working in the emergency department at WakeMed in Raleigh, NC.  The hospital had a clinical ladder program, but to climb that ladder, he would need a bachelor’s degree.  Middleton applied to several institutions that offered BSN degrees, but the answer was the same.  “They wanted me to basically start all over as a freshman,” Middleton recalled.  “My prior vocational and virtual learning classrooms presented a challenge in receiving credit for my prior coursework toward a four-year-degree from a brick-and-mortar institution.”

At this point, Middleton had been working as a LPN and RN for 13 years, and he had four years of classes under his belt.  He and his wife were raising two children, and he was working full-time in a busy level one trauma center.  “Starting over was not an option,” he said.  “Even as rejections came from several institutions, I knew there had to be a better way, I just had to find it.”

It was around 2011 when Middleton met Dr. Joy Kieffer, Chair of the nursing program at the University of Mount Olive.  “During the passage of my years, I have learned, there are helpers and there are hinderers,” Middleton said.  He distinctly remembers both for the role they played in his life.  “Dr. Joy Kieffer is more than just a helper, she is trajectory shifting force, not just for me but for countless other nurses.”

Dr. Kieffer evaluated Middleton’s transcript.  Instead of fragments, she saw building blocks. Kieffer worked with Middleton and gave him a plan to reach his goals and an outlet through UMO to do so.  He was given a schedule that could work with his busy life: one class at a time, five weeks per class, graduation in two years.  “I did not have to repeat classes that I had previously taken, as other hindering institutions demanded,” he said.

“I spent my entire life being told that I could not meet my goals because of being hearing impaired, growing up poor, being a first-generation college student, or not knowing the right people,” Middleton shared.  “Even with all the determination I had, I still had to find a helper.  Dr. Kieffer was that person for me, she was the catalyst who launched me towards the next step in my career.”

Middleton’s bachelor’s degree from UMO opened many new doors for him.  In 2017, he enrolled in the master’s degree program at Wright State University in Dayton, Ohio.  The program presented rigorous challenges, including elements of examinations that are required for students in the school of medicine.  Once again, overcoming a hearing challenge was necessary since the course relied heavily on video lectures that required captioning.  Middleton completed the program while concurrently working as an oncology nurse.  He also passed the board examination and obtained licensure as a Family Nurse Practitioner.

“It has been an arduous, but rewarding journey to have transcended circumstances and obtained an education,” Middleton said.  “The perspective I am able to offer my patients and colleagues is one that allows me to draw on a fund of knowledge, relevant evidence-based practice, and life experience to help solve complex problems.  My overall goal is to be the helper that creates opportunities for others to achieve their goals.  It is difficult to separate where I am today versus where I would be, without the University of Mount Olive, and more specifically without Dr. Kieffer.  Both create pathways for people to gain knowledge, earn successes, and move nursing forward.” 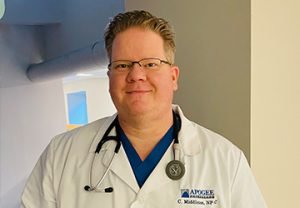