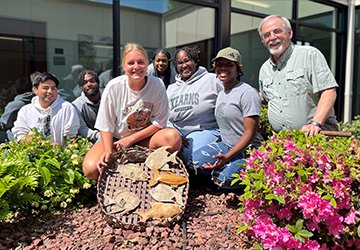 MOUNT OLIVE – Six students from the University of Mount Olive’s Art 166 course spent the spring semester working on a public work of art which will be displayed in the Jean F. Ackiss Prayer Garden located inside the Glover Center for Religious Studies on the UMO campus.

The theme for the piece unfolded as the class members gathered inside the prayer garden to discuss the project.  “We talked about many ideas, including crafting a totem,” said sophomore Jessica Aylward, a graphic design and fine arts double major from Durban, South Africa.  “However, we chose a religious themed project due to where the art would be displayed.”

The students created a ceramic basket filled with a variety of fish to represent Matthew 14: 13-21.  “In this passage, Jesus took the few provisions of bread and fish that the people had and multiplied them to feed thousands of people,” said Tylyia Triggs, a sophomore exercise science major, who is also double minoring in sports psychology and coaching.  “In this scripture, Jesus revealed that He can and will provide, and His provision will be in abundance.”

To coincide with the scripture, the class chose to name the collaborative artwork, “God’s Provisions to the Multitude.”  “This is the message our class hopes to relay as visitors view our artwork in the prayer garden,” Triggs, of Garner, NC, said.

To begin the project, the students arranged strips of clay vertically and horizontally over each other to create a woven basket appearance. “Our first attempt did not quite work out the way we planned,” noted Aylward.  “We started again and redid the basket making it stronger and more supported.”

Next, the students sketched a fish template.  Once the sketch was completed, the students rolled out their clay and formed their fish.  “We added details like scales, to create a more realistic look,” said Graphic Design major Jasa Ray Pope of Wilson, NC.  “We then added a hole so that we could blow air into the fish.  Once the fish were dry, we added them into the kiln, took them out, glazed them and reinserted them back into kiln.”

“In the end, this project was worth all the energy and time spent,” said Aylward.  “We all felt good knowing we were making this project for a purpose, and that it would be seen by other students, and visitors to the prayer garden.”

Ceramics Instructor Frank Grubbs said, “The students collaborated as a team and worked hard on this project. They worked well as a group, and I am proud that they saw the project to completion.” 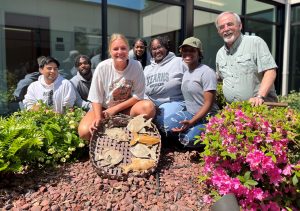 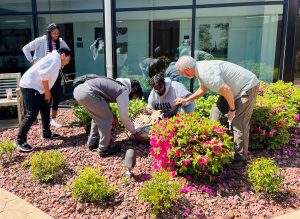 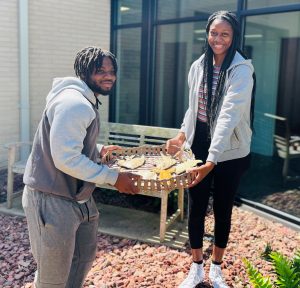