MOUNT OLIVE – Carver Heights Principal Winter Goodson knows a thing or two about life, education, faith, and hard work.  It is a combination of lessons gained throughout her 40 years that have made her who she is today and have placed her on the path of a career she loves.

“I would say that my success can be attributable to working hard and being coachable,” she said.  “I have several people that I consider mentors and I respect their input. They have been where I am and I have learned so much from each of them.”

Growing up, Goodson had no clue what she wanted to do with her life.  “But I knew it would be important,” she said. “I knew I wanted to make a difference.”

In her early years, Goodson excelled in whatever she did and made outstanding grades. However, after her parents divorced, she lost interest in school and began getting into trouble. “I became a teenage mother and lacked direction,” she said.

In high school, Goodson found a passion for basketball, playing under Coach Eva Patterson-Heath.  Goodson matured greatly under Coach Patterson’s influence, and eventually earned a scholarship to play for Mount Olive College, now the University of Mount Olive (UMO). “Mount Olive provided me with a top-notch college education.  The focus they placed on Christian service has stayed with me,” Goodson shared. “While at UMO, I began going to church regularly and contemplating my life’s calling.”

In 2003, Goodson earned her bachelor’s degree in recreation and leisure studies and began working with the Sampson County Parks and Recreation in Clinton.  After a year, she decided she needed a job with more regular hours.  Goodson began working at D.S. Simmons Academy as an afterschool coordinator and general daycare staff member. It was there that Goodson began to realize her passion of working with children.

“Once I became a teacher, there was no doubt in my mind that this was what I was supposed to be doing,” she said.

Goodson joined Wayne County Public Schools as a PE teacher and later obtained her National Board Certification. After nine years in the classroom, she desired to become a principal and returned to school to obtain her master’s degree in executive leadership. Over the next several years, Goodson gradually worked her way up within the Wayne County Public Schools system from Curriculum Facilitator at School Street Elementary, to Instructional Coach, Assistant Principal, and then Principal at Carver Heights Elementary School.

“Education is truly an equalizer,” she observed.  “I understand that education is the key to ending the cycle of poverty, a circumstance I am familiar with, both personally and professionally.”

According to Goodson, Carver Heights is unique in that it is the only school in Wayne County with a third through fifth grade configuration.   A restart school, Carver Heights uses a reform model concept designated for schools that have persistently been low performing schools. Goodson indicated that the restart model allows the school to have charter-like flexibility for staffing, budget, and calendar options.

“We have the best students and staff, as well as awesome community support,” Goodson beamed. That fact is evidenced by Carver Heights exceeding growth for the 2018-2019 school year.

Goodson notes the biggest challenge facing educators today is the unpredictable nature of school. “From one year to the next, initiatives and programs may change,” she observed.  “I think UMO prepared me to manage these changes by understanding that whatever comes, it comes into a culture of excellence. Doing my job ‘as unto the Lord’ ensures that I maintain high standards for my students and staff, no matter what the issues. Even a worldwide pandemic is no match for the culture of Carver Heights.”

Speaking of COVID-19, Goodson received the Innovative Educator Award during the 2020-2021 school year for outstanding service to students during the COVID-19 Pandemic. The award was presented by the Goldsboro Alumnae Chapter of Delta Sigma Theta Sorority, Inc.

Goodson considers herself to be a lifelong learner.  In fact, she is set to earn her doctorate degree in education in 2022.  As for future aspirations, she said, “I am still evolving.  I think eventually I will work as a school superintendent or director. I also see educational consulting in my retirement future.  I can think of no better calling in this world than an educator.”

Goodson was born and raised in Hoke and Robeson Counties. She is the daughter of Rebecca and the late Richard McNeill. She is married to Anthony Goodson Jr. They have three sons, Tyleif, Keyshorn, and Anthony III, and one grandson, Tyleif Jr. The couple reside in Goldsboro. 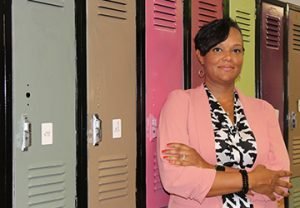