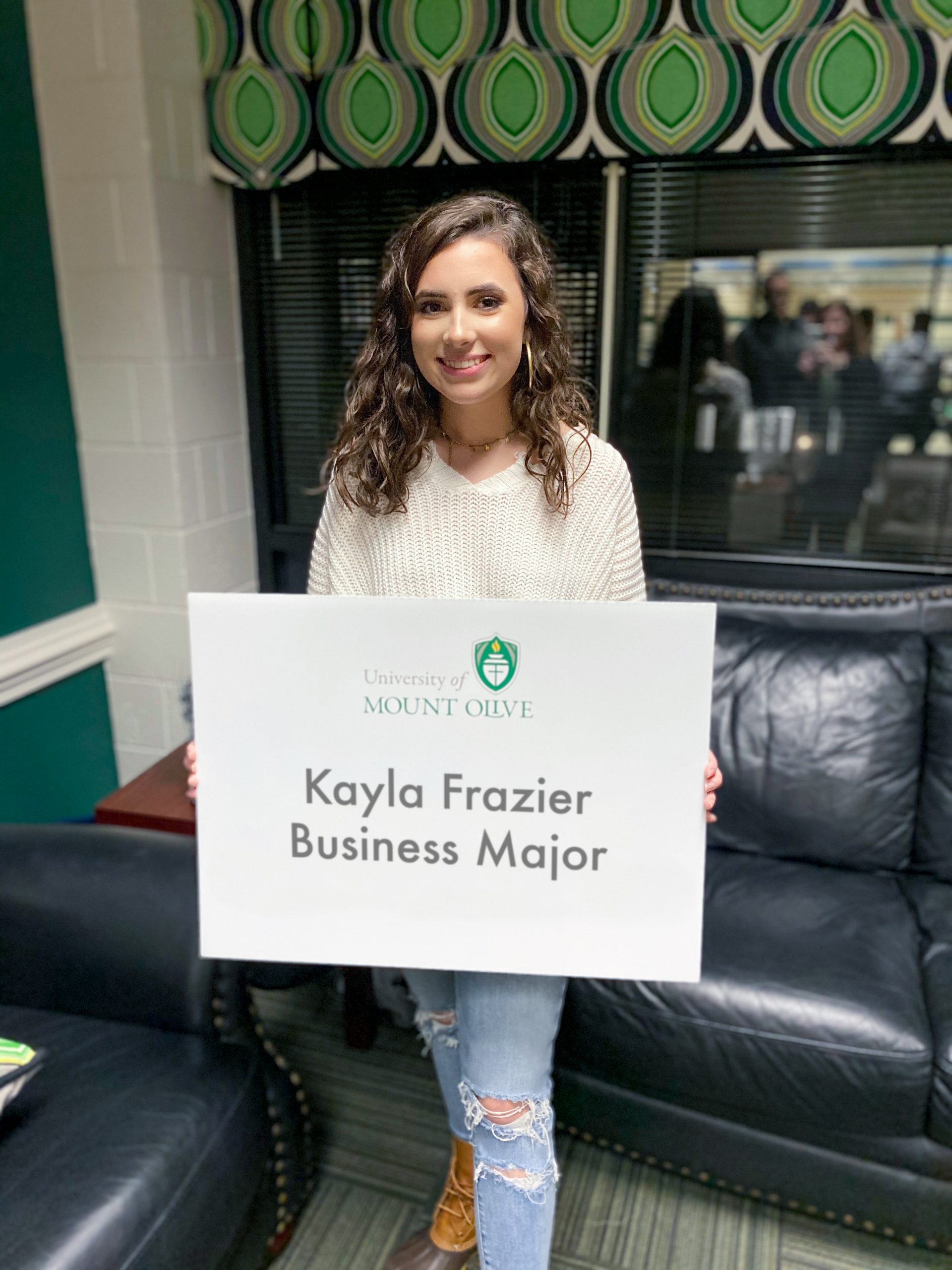 MOUNT OLIVE- When Kayla Frazier graduated as valedictorian of Farmville Central High School in 2019, she could have attended any of the 11 schools that had accepted her. However, it was the lure of smaller classes and personal attention that solidified her decision to attend the University of Mount Olive (UMO).

“I knew I did not want to go too far away from home, but I did want to go far enough to be in a new environment so that I could grow as an adult and increase my independence,” she said. “I also wanted to go somewhere that made me feel welcome and that felt like home.  After visiting UMO, I realized that, I had made my college decision.”

During her first year at UMO, Frazier has thrived in and out of the classroom.  With a cumulative GPA of 3.97, the business major has landed a spot on both the University’s Dean’s and President’s lists.  She is a student worker in the UMO Admissions Office, plays intramural volleyball, and volunteers in the children’s ministry at Marlboro Original Free Will Baptist Church in Farmville.  However, all of these social interactions came to an abrupt halt with the onset of COVID-19 and the closure of the UMO campus.

“There is so much that I have missed while being away from UMO,” Frazier said. “I miss seeing my friends and professors face-to-face. I also miss the simple things like going to eat with friends and visiting each other whenever we had free time.”

Frazier, who professes to be a “hands-on” learner, was able to adapt to the new normal of online education.  “The Zoom meetings helped me to feel connected with my professors and classmates, even though we weren’t seeing each other face-to-face like usual. My professors were very helpful and understanding during online instruction and that definitely helped the transition go smoother.”

Although Frazier continued to make straight A’s during the online instruction process, she is very much looking forward to returning to the UMO campus in August.  “The campus connects everyone in so many special ways,” she said.  “I will be so happy when I am able to go back, because I have missed it so much.”

UMO recently announced plans to start its fall semester on August 25, and go straight through to Thanksgiving with the remainder of the semester being conducted remotely, and ending on December 4.

“My first year at UMO has taught me to be patient, because the right things will happen at the right time,” she said.  “I always put my trust in God, because ultimately, He knows what plans He has for us.”

Frazier is the daughter of Marvin and Beth Frazier.

Is COVID-19 Stressing Out Your Kids? by Natalie Kemp, MA, LPA, Department Chair for Psychology and Assistant Professor of Psychology