Former Military Couple Set to Graduate from UMO May 5

Former Military Couple Set to Graduate from UMO May 5

MOUNT OLIVE – For many students, getting a college education starts right after high school graduation. However, some students take a different path to getting a degree. Jason and Linda Sampson are two examples of doing things differently.  The Sampsons have been married for 15 years.  On May 5, they will graduate from the University of Mount Olive (UMO) together.

Jason was born and raised in Avoca, Iowa. He entered the Air Force shortly after graduating high school. For Jason, military service was much more than an echo of history. It was a tradition threaded through generation after generation within his family.

While in the military, Jason served in Colorado, Kansas, Italy, North Carolina, South Korea, and Texas. He was deployed to Qatar and Afghanistan.  In Texas, Jason met and started dating Linda. They fell in love and eventually got married.

Linda was born and raised in Jacksonville, Florida.  Like Jason, she joined the Air Force after high school. Her military service includes stations in New York, Texas, North Carolina, and Alabama, with tours of duty in Kabul, Afghanistan. Linda was also an ROTC Personnel Officer at East Carolina University.

Jason retired from the Air Force in 2011 as a Specialist Flight Chief after 21 years of service.  Linda followed suit in 2013, retiring as Master Sergeant, also with 21 years of service.  Shortly after, the couple moved to Pikeville, North Carolina.  Still young, they started looking at post-service career options.

With an associate’s degree from Wayne Community College Linda decided to pursue her bachelor’s degree in religion from UMO as a traditional student.

“I chose this based on the Post 9/11 GI Bill that is offered to veterans,” Linda said.

Jason soon followed suit. “I wanted to get my degree before turning 50 for a variety of reasons, including improving my employability and setting an example for my kids,” he said.  “I also knew a college degree could lead to more career and life satisfaction.”

Jason enrolled at UMO in the spring of 2015 as a traditional student seeking his bachelor’s degree in business management. “I like the classroom environment and the one-on-one time with instructors.”

Going to school together has not been easy for the Sampsons, but it has allowed them to understand what the other is going through. “We both struggle for time to sit at the computer and do homework. We are challenged to find time for each other, but we have found many times we are able to connect at school more than at home,” Jason admits. Linda adds, “It has been a complete joy to go to school with Jason. I know our situation is unique, but I wouldn’t want it any other way.”

The Sampsons have three children, Kirsten (18), Makayla (14), and Nolan (11).  Needless to say, the couple finds themselves extremely busy with school and related activities, for not only their children, but for themselves as well.

“The kids have been very supportive of our decision to back to school,” Jason said.  “They appreciate and understand our busy schedule, and are gracious with giving us quiet time to study,” Linda adds.

With graduation just days away, the Sampsons are looking towards the next chapter in their lives.  Jason, now 46, would one day like to open his own business. Linda, 44, plans to pursue a lateral entry teaching position.

“I always wanted to go back to school to get my degree to prove to myself I could do it,” Jason said.  “Now, that I have done it, I feel more confident in my business knowledge and in my own abilities.”  Linda said, “I always wanted to continue by education, but never thought I had the time or the energy.  Thanks to UMO, my degree is a goal that I have finally achieved.  I could not be happier!” 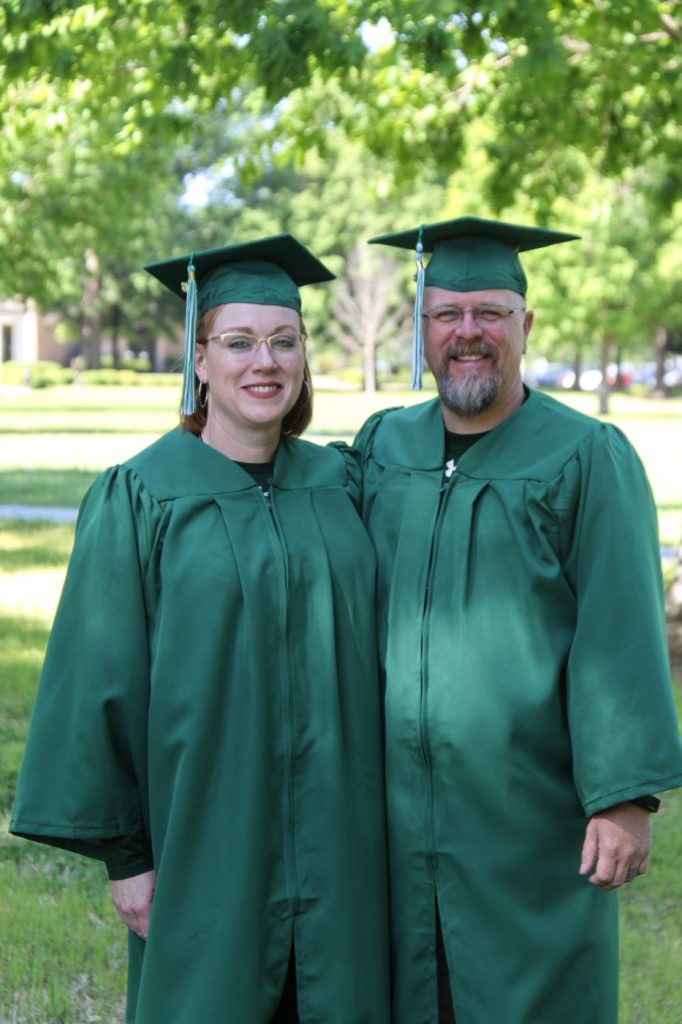