Howard and Sharlene Scott Honored with Endowment at UMO Howard and Sharlene Scott Honored with Endowment at UMO

MOUNT OLIVE – Howard and Sharlene Scott were recently honored with the naming of an Endowed Scholarship Fund at the University of Mount Olive. The fund was established by Rachel Crawford, Janice Scott, and James and Judy Pate in honor of Howard and Sharlene’s life-long efforts to promote Christian higher education and support the mission of the University of Mount Olive.

Howard’s family commented, “With this endowment, the family desires to honor Howard and Sharlene’s years of devotion to the University of Mount Olive and the Original Free Will Baptist Denomination. The University’s work is important to our family members for its educational and spiritual values. This endowment will help provide students with scholarships, giving them access to a quality education and opportunities that will enrich their lives.”Howard earned his associates degree from Mount Olive College in 1974 and went on to earn his bachelor’s degree in agriculture education and a master’s degree in adult education with a minor in sociology from NC State University in 1976.  In 1978, he became the first Mount Olive alumnus to serve on the Board of Trustees.  He will retire his service on the Board in June after 43 years.

“Serving on the UMO Board of Trustees has kept me involved in the community and the OFWB Denomination,” Howard said.  “It has also given me experiences and insight to various areas of education, economic development, and student development.”

Professionally, Howard worked for 35 years as a director with the Wayne County Extension Service, before retiring in 2011.  He is notorious for his creative sayings and tag-lines, called Howardologies.   Howard is also known for his unique pastime, something he calls “recreational bush hogging,” a hobby that allows him time to think and reflect. Since retiring from extension work, Howard has enjoyed pastoring at Pine Level OFWB Church for the past eight years.

Sharlene was awarded the Life Membership Award in 2019 for her service for the Woman’s Auxiliary Convention of the Original Free Will Baptist.

“I can’t think of a more fitting way to honor the legacy of service by Howard and Sharlene than through an endowed scholarship fund which will continue to pay forward their commitment to Christian higher education,” said UMO President H. Edward Croom.

The purpose of the Howard F. and Sharlene C. Scott Endowed Scholarship Fund is to provide financial assistance to students who might not otherwise have the opportunity to attain an education.  Primary consideration will be given to students demonstrating a strong evidence of personal integrity, moral character, good citizenship, academic promise, and a sincere commitment to attaining an education.  The first scholarship will be awarded in the fall of 2021. 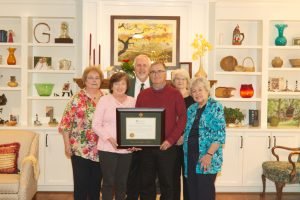