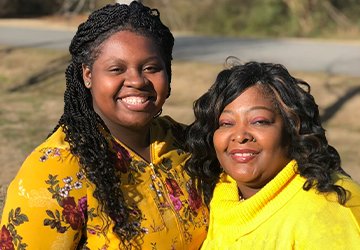 MOUNT OLIVE-It is ironic how often life comes full circle.  That is the case for Centora and Trinity Holder of Four Oaks.  Although 27 years and many circumstances separate the mother and daughter, both have found their educational fulfilment at the University of Mount Olive.

After graduating with honors from high school in 1993, Centora left home to attend NC A&T University with the plans of becoming a doctor.  However, life got in the way and one year later she returned home.  Over the next few years, Centora worked several jobs before enrolling at Johnston Community College to earn a cosmetology certificate. After several temporary jobs, failed interviews, and a few missed opportunities, Centora saw a commercial for Mount Olive College, now the University of Mount Olive (UMO).  “I felt Mount Olive was the answer to my prayers,” she said.  “Watching that commercial I realized that although my goal was delayed, it was not denied.”

As a wife, mother of three, and full time employee, returning to the classroom required a great deal of dedication and sacrifice for Centora.  The year was 2006 and, this time, she was seeking a degree in business administration with a focus on management and organization development. “I immediately felt that Mount Olive had the same desire for my success as I did,” she said.  “They partnered with me to achieve my goals, and I was astounded by the support, encouragement, and care I received from the College.”

Throughout her experience at Mount Olive, Centora attended class-after-class with professors who not only taught the needed academic content, but also never lost sight of the obstacles and distractions that adult students often face when juggling multiple responsibilities.  However, one professor really made the most impact on Centora.  She recalls one day after class, the professor asked if she had ever thought about becoming a teacher.  She replied, “Absolutely not.” The professor told Centora that she had missed her calling.  “It was something about his words that shook me to my core,” she stated.  “Up until that point in my life, all I thought about was how much money I could make at a job.  I never considered my calling.”

Centora completed her bachelor’s degree with honors and continued to work in corporate America.  From time-to-time, she remembered the conversation with the Mount Olive College professor. After the birth of her fourth child, Centora knew she needed a career change to be more available for her children.  She applied for a lateral entry position with Selma Middle School.  “After my first day on the job, I walked out in tears, because I knew I had found my calling,” she said.

To fulfill the lateral entry requirements, Centora returned to NC A&T and earned her masters of art in teaching in business education and another master’s degree in instructional technology. After more than a decade in the classroom she decided to impact the lives of students on another level and returned to school to pursue a post master’s certificate in school administration from the University of North Carolina at Greensboro. She is quick to note that her degree from Mount Olive College was the catalyst for a career that she has thoroughly enjoyed and one that enabled her to teach for more than a decade.  She now serves as an assistant principal at McGee’s Crossroads Middle School in Benson, NC.

As Centora’s children, Miracle, Trinity, Destiny, and D.J. grew, she secretly hoped they would follow in her footsteps by attending what is now the University of Mount Olive.   It was her second born, a star track and field athlete, that decided to also become a UMO Trojan.

“Trinity and I discussed how competing on a collegiate level can be challenging while balancing sports and schools, but I had no doubt that my daughter could be successful at UMO,” she said. “During our campus tour, everything was just as I remembered.  Everyone was so welcoming and accommodating, and it just felt like UMO was the best choice for Trinity.”

Centora remained objective, but was elated when, on the drive home, Trinity said “Mama this is where I am supposed to be.” “I became emotional,” Centora recalled, “because I knew I could rest easy knowing my child would be provided with the care, support, and resources for her next chapter in life.”

Trinity is now in the second semester of her freshmen year.  As a student-athlete, she has maintained a 3.94 GPA while majoring in criminal justice.  It is her dream to one day become an attorney. “In these unprecedented times, UMO has not missed a beat,” Centora said.  “Trinity loves attending Mount Olive as much as I did.  I am excited for her future at UMO and the foundation it will provide for her success in life.”

“My collegiate experience at UMO has been phenomenal,” said Trinity.  “I feel that I am part of a family. My professors know me by name and are readily available to assist me and offer advice. As a student athlete, I have enjoyed the opportunity to serve the Mount Olive community on and off the field. I am honored to attend the same university as my mother and I am hopeful to achieve the same success in life that she has, which all started at UMO. I am proud to be a UMO Trojan!” 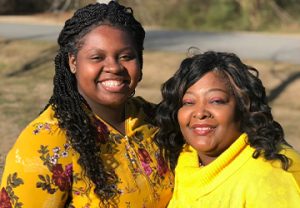