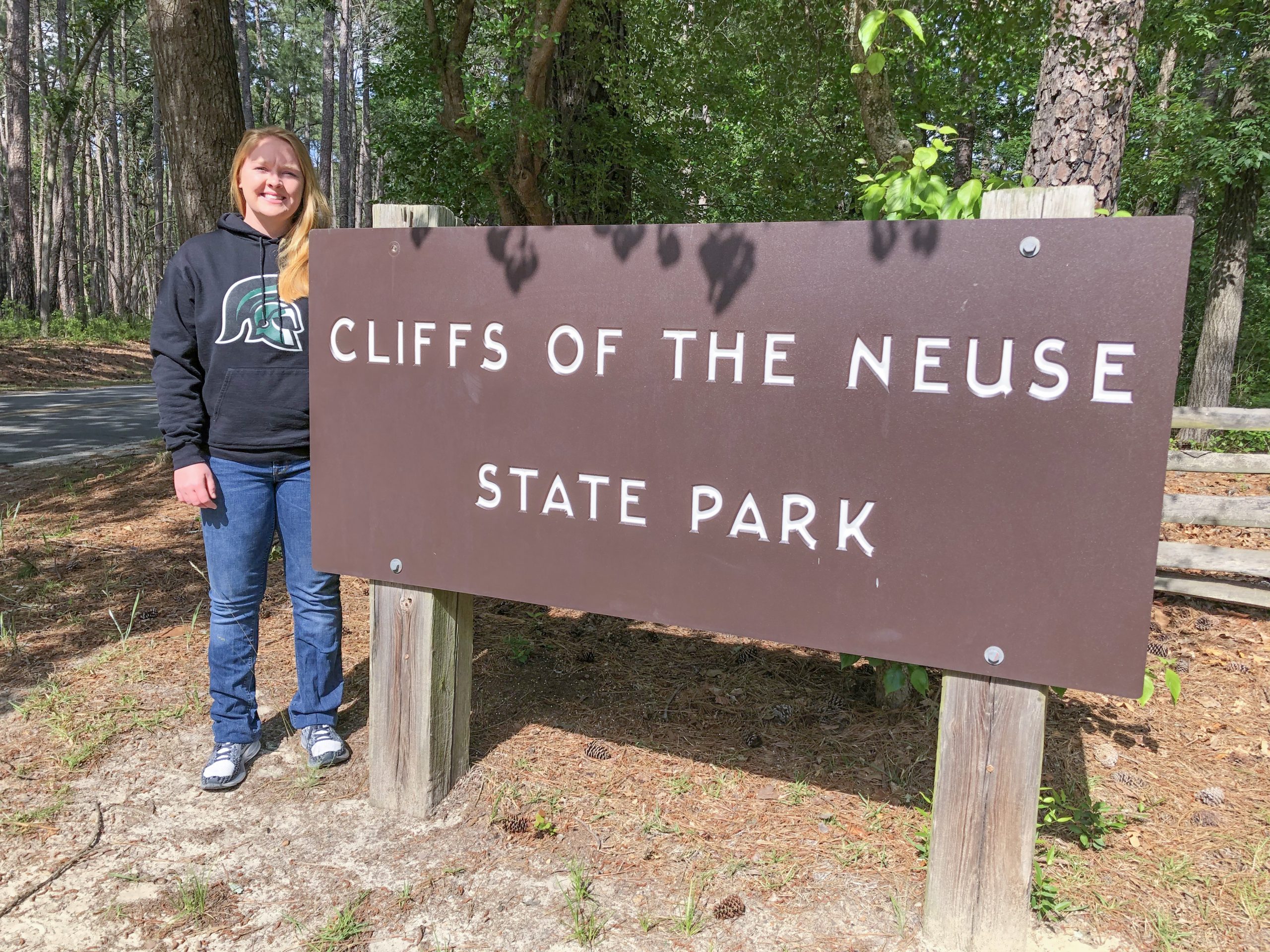 MOUNT OLIVE- University of Mount Olive biology major Allison Shingleton aspires to become a veterinarian.  Although she will not complete her undergraduate degree until the spring of 2021, she is already positioning herself for success.  Outside of her academic studies, the Stantonsburg, NC native enjoys job shadowing at Brentwood Veterinary Clinic in Wilson, working with cattle at Cherry Farms, and participating in a research study with the Cliffs of the Neuse State Park in Goldsboro.

“I love animals and conservation, and I just know becoming a vet is something I was born to do,” she said.  “Research and hands on experience are pivotal components for graduate students, and these opportunities are my pathway,” she said.

Shingleton started the research study at the Cliffs of the Neuse State Park in 2019. The premise of the study involves watching, listening, and documenting native birds in the park, especially near areas populated by longleaf pine trees.  According to Shingleton, longleaf pines were once very prevalent in eastern North Carolina.  However, due to land conversion and fire exclusion, the trees now only make up a very small percentage of forest land.  As the NC State Park Service has encouraged natural regeneration of the longleaf pine, it needed documentation to record the project’s success and resulting effect on various bird species populations.

Twice weekly, Shingleton makes the mile and a half hike to two different spots in the state park to conduct the bird census.  Because birds are most active in the morning, she usually conducts her study around 8 AM. The morning jaunts provide her with a tranquil time to think and reflect.

“Birds are awesome characters,” she shared. “They are some of our greatest gifts, and we need them in our ecosystem.”

Before taking on the project, Singleton had no prior bird knowledge. She, therefore, had to familiarize herself not only with each bird’s physical characteristics, but with their calls as well.

“Some of the birds I have studied and look to see are the Summer Tanager, Blue Grosbeak, Pine Warbler, Prairie Warbler, and Brown-headed Nuthatch,” she noted. “I have really learned to recognize and appreciate each bird’s distinct call and markings.”

Shingleton records her findings and adds them to a central database.  “Each week we tally the birds that are seen or heard and note their location in the park,” she said.  “This data helps track the absence or the presence of bird species that are using the restoration areas. As conditions change and start to return to an open, longleaf woodland community with both young and older trees, the mentioned targeted birds will begin to use the area. This lets the managers know that their restoration efforts are working.”

“Allison’s dedicated bird monitoring surveys at Cliffs of the Neuse provides us the needed data in detecting subtle changes of the bird species using our natural community restoration areas,” said James Sasser, Coastal Region Biologist. “This information will be used to measure our success and to guide our future restoration efforts.”

Not only has Shingleton expanded her bird knowledge through this voluntary experience, but she has learned a great deal about conservation as well.  “I have learned how much damage humans can cause to our ecosystem, and how long it can take for that ecosystem to recover,” she said.   “It is remarkable to see and hear birds returning to this area because of a single type of tree.”

Shingleton was poised to share her experience about the bird census at the NC Academy of Science in March.  However, due to COVID-19 that event was canceled.

Since COVID-19, many people are stuck at home and doing some amateur bird watching of their own.  Shingleton’s advice to those is, “The early bird gets the worm; start early in the morning, purchase a reputable book, like Peterson Field Guide to Birds of Eastern and Central North America, and be patient.  Bird watching can be very tough if you’re trying to learn the calls. It takes time and practice, and that’s perfectly okay.”