MOUNT OLIVE –Joshua Artis clearly remembers the day he first walked onto the University of Mount Olive campus as a transfer student. “I was eager to start building relationships with my classmates and gain the knowledge and scholarship of my professors,” he said. “Most of all, I was filled with the hopes and dreams of one day becoming a great schoolteacher.”

Artis was inspired by his father, who was also an educator.  “When I was a child, my dad’s former students would always approach him to tell him how much they enjoyed his class and having him as a teacher,” Artis recalled.  “That memory and that feeling of pride in my dad made me want to become a teacher.”

Artis grew up in a family of musically gifted individuals.  “Everyone could either sing or play an instrument,” he said.  Artis chose the trumpet as his instrument of choice.  “I have always had an inborn talent to perform as a musician, and I love sharing that gift with others,” he said.

After high school, Artis enrolled at Wayne Community College where he thrived under the tutelage of Professor Steel Sasser, a UMO alumnus.  “He was one of the best musicians that I had ever had the chance to study with,” Artis recalled.

Artis transferred to the University of Mount Olive in the fall of 2011.  At UMO, Dr. Ruby Bell, Associate Professor of Education, also had a profound impact on Artis.  “She was the first African American woman with a doctorate with whom I had the privilege of having as an instructor,” Artist said.  “Dr. Bell was very inspiring to me.  She was the perfect role model for someone who looked like me, was intelligent, successful, and hardworking.”

Artis recalls that Bell was available for her students, even when times were busy. “She told us daily to get inside our students’ hearts, gain their trust, and teach each and every one of them – every child, every chance, and every day.”  It is a message that stuck with Artis.

While seeking his bachelor of science degree in music education, Artis juggled two part-time jobs.  Some days he struggled to meet all of life’s busy demands. However, Dr. Ruby Bell’s mantra, along with Artis’s passion for music and teaching, drove him to persevere.  Artis graduated from UMO in the spring of 2013.  His first teaching job was at his alma mater, Goldsboro High School.  He built the band program from 12 students to over 75, and taught even more students who elected to join his music classes.

Artis later moved to Warsaw Elementary School in Duplin County.  There, he created his first percussion and wind ensembles with third and fourth-grade students.  After a year on the job, he was recruited by Miami-Dade Public Schools in South Florida.  He has been the music and percussion teacher at Avocado Elementary ever since. During his six years at the school, Artis has built a drumline and a majorette team for the school, and they perform often for community events.  In 2018-19, he was nominated and chosen to receive the Rookie Teacher of the Year award.

At age 33, Artis looks back on his time at UMO as a transitional period in his life.  “Mount Olive prepared me to achieve my career goals by teaching me not only how to conduct myself as a professional, but also about living life,” he said.  “Mount Olive showed me that my destiny is mine and that I have the knowledge and power to transform my own life. I will never forget my Mount Olive family, and I will always be proud to say that I am an official product of the University of Mount Olive.” 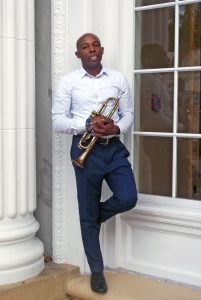