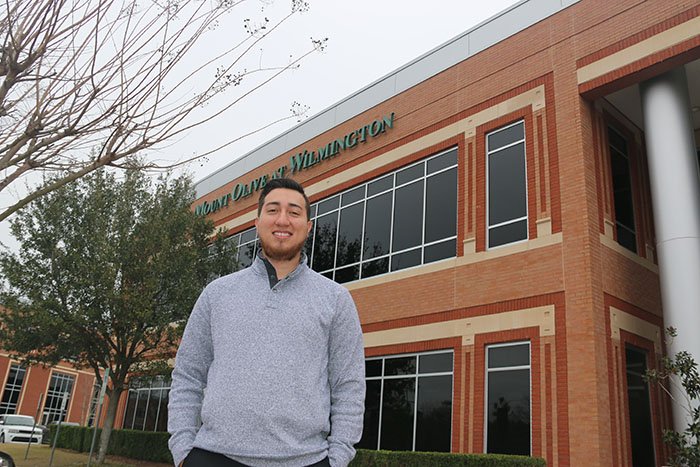 MOUNT OLIVE- Twenty-five year-old Anthony Hernandez of Ivanhoe distinctly remembers his childhood. He grew up in New Jersey. His parents, Rene and Blanca Hernandez, migrated to America from Honduras in the mid-1980s, seeking a better life.

“My parents have always worked hard and encouraged me in everything I do, especially in school,” Anthony shared. “It is my mom’s biggest dream for me to graduate college and get a good job.”

That dream will be fulfilled this May when Anthony receives his bachelor’s degree in healthcare management from the University of Mount Olive (UMO). He will be the first in his family to graduate high school, to earn an associate’s degree, and now to earn a bachelors’ degree. But, his achievement has not come without hard work and sacrifice.

After the tragedy of 9/11, the Hernandez family moved from New Jersey to Wallace, NC. They wanted a safer environment to raise their family. Anthony attended Wallace Rose Hill High School where he played soccer and pushed himself academically.

“I remember many times being on the Honor Roll and looking for my parents during the awards ceremony, but they could never make it. I was disappointed, but I knew they were working multiple jobs, so I could have a better life.”

After high school, Anthony attended and graduated from James Sprunt Community College with his associate’s degree. He then enrolled at the University of North Carolina at Wilmington, where he attended for a year.

Looking to return to the classroom, Anthony had heard many radio commercials touting the advantages of the University of Mount Olive’s online programs. So, one day he stopped into the UMO at Wilmington Educational Service Center to find out more.

“I remember being so nervous that I almost did not get out of the car,” Anthony recalled. “But in the back of my mind, I kept hearing my mom’s voice of encouragement.”

He also heard the encouraging words from Site Administrator Ellen Poirier, who helped dispel Anthony’s anxiety and signed him up for classes.

“Ms. Ellen had the biggest smile,” Anthony remembered. “The way she spoke to me, made me feel right at home. She really gave me the push I needed to restart my educational journey.”

UMO was the right fit for Anthony. Working a full time job and supporting his family with three young children, he needed the flexibility of an online education.

“Before I came to UMO, I was driving back and forth from work to school. My family time was limited, and I was stressed. But, when I came to UMO everything just fell into place. The radio ad was right…you can have a job, a family, and earn your degree all at the same time.”

A year and a half into the program, Anthony received a job opportunity he could not refuse. At the time he was working as a pharmacy tech for Walgreens in Rose Hill, a position he had held for four years. Being bilingual, Anthony was a welcome face to many Spanish speaking customers, who often struggled with the language barrier and confusing prescriptions. His skillset and compassion for customers helped Anthony develop a positive reputation in the pharmacy world. Those characteristics, coupled with his pending graduation, enabled Anthony to land a job with New Hanover Regional Medical Center’s new employee pharmacy.

“I feel certain that I was able to get this job opportunity because of my experience and educational pursuits,” Anthony said. “I now interact daily with doctors, nurses, and directors. I thoroughly enjoy my job!”

Anthony’s ultimate goal is to obtain his master’s degree and work in hospital administration.

“It has been a long process, but worth every minute,” he said. “There were times I felt like I was never going to make it, but I kept pushing through. It took me three years to get my associate’s degree instead of two. It also took me longer than most to obtain my bachelor’s degree, but I never gave up. In the back of my mind, I kept telling myself, ‘You can do it.’”

Anthony is not sure who will be more excited when he walks across the graduation stage, his parents, his fiancé, his kids, or himself. He does know that this milestone has enabled him to be more marketable in his career choices, which will ultimately allow him the flexibility of being in attendance when his own kids have major milestones in their lives.

“That has been one of my motivators all along,” he said. “I know the sacrifices my parents made for me, and I want to make them proud. I also want to be able to be there for my kids, in the way that my parents so much wanted to be there for me. When my kids earn a spot on the honor roll, I want them to be able to say, ‘There’s dad.’ That is how UMO is transforming my life!”

The University of Mount Olive is a private institution rooted in the liberal arts tradition with defining Christian values. The University, sponsored by the Convention of Original Free Will Baptists, has education service centers in Mount Olive, New Bern, Wilmington, Seymour Johnson Air Force Base, Research Triangle Park, and Washington. For more information, visit www.umo.edu.

Dr. Edward Croom Appointed as Interim President of the University of Mount Olive