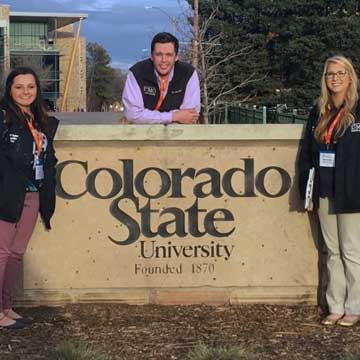 MOUNT OLIVE- Seven University of Mount Olive (UMO) students recently traveled to Colorado for the National Association of Landscape Professionals (NALP) National Collegiate Landscape Competition (NCLC). They joined other students, industry professionals, faculty, and volunteers from across the country to demonstrate their skills in the landscape industry’s largest recruiting event and competition.

Tate ranked 34th out of 788 participants and placed 13th in Mini Track Loader Operation. Scott came in 2nd in Sales Presentation. Tate and McKee placed 14th in Irrigation Assembly, and Byrd and Kiser placed in the top 50% in Plant Identification. Meares came in 20th place in Skid Steer Operations, and Parks placed in the top 50% in Plant Problem Diagnosis.

“Going to NCLC was an amazing experience for me,” said McKee. “This competition was a learning experience and a chance to work hands-on in a multitude of different areas in the industry. Additionally, I had the opportunity to interact with various companies to discuss job opportunities.”

“I could not have asked for a better group of students to take to Colorado State University to participate,” said Phillips. “They represented UMO with prestige and continue to exceed my expectations with their knowledge, skill, and passion.”