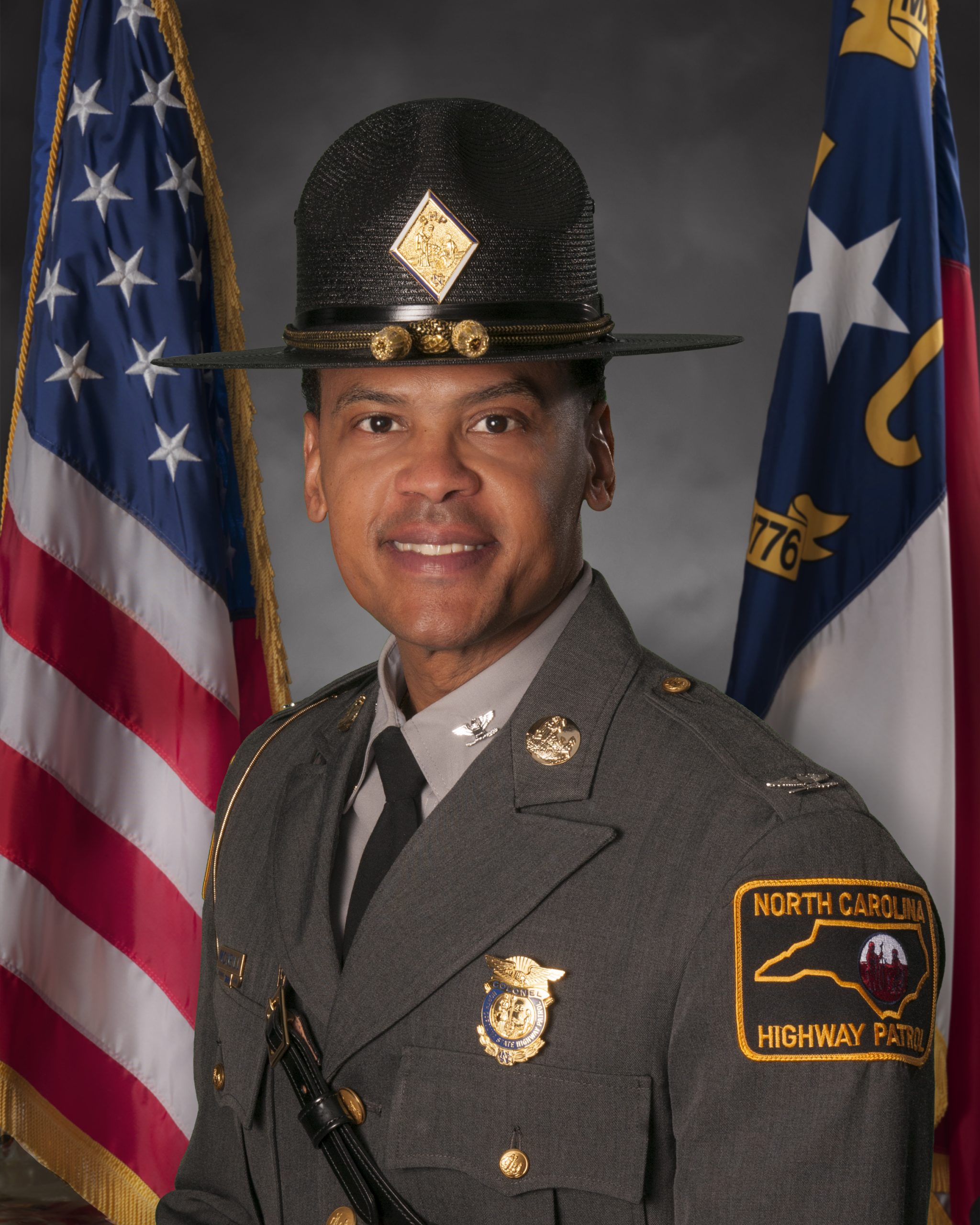 MOUNT OLIVE – Leading the most-highly recognizable law enforcement agency in the state is no small task.  As Commander of the North Carolina State Highway Patrol (NCSHP) University of Mount Olive (UMO) Alumnus Glenn M. McNeill, Jr. must set a positive example each and every day as he upholds the duties of his office, which has more than 2,400 employees.  It is a job that not only gives him professional satisfaction, but also fulfills a personal need to lead and protect the citizens of North Carolina.

McNeill was born and reared in Reidsville, North Carolina.   During his youth, his mother, Ethel Johnson McNeill, was murdered.  Her assailant was never identified, captured, charged, or brought to justice. This tragic and unfortunate occurrence has had a profound impact on his upbringing, and has served as the primary reason for McNeill wanting a career in public safety.

A military veteran, McNeill joined the NCSHP in 1993.  Since that time, he has served in various positions, starting as a Trooper in Durham, and serving with the Special Operations Section. Rising through the ranks he ultimately led the Special Operations Unit as its Troop Commander. McNeill was promoted to the rank of Major in 2014, where he served as Director of Training which provided him with the opportunity to oversee the administration of the State Highway Patrol Training Academy. Governor Roy Cooper appointed McNeill as Commander of the NCSHP on February 2, 2017.

“It is a great honor and privilege to serve as the 27th Commander of the North Carolina State Highway Patrol,” McNeill said. “I love working together with my leadership team to ensure all Highway Patrol employees achieve excellence in their delivery of quality public safety services to all North Carolina citizens.”

Throughout his career with the Highway Patrol, McNeill has developed a positive reputation of consistently looking for ways to do things better and more efficiently.  “Glenn truly strives to make a difference in everything he does and makes every effort to leave things better than he found them,” said retired Patrol Major Jeffrey Babb.  “He is not afraid to make the tough decisions, regardless of the situation, and he is able to put the organization’s mission ahead of his own.”

Retired Patrol Major, current Department of Transportation State Traffic Incident Management Coordinator, and UMO Alumnus Wayne Taylor said, “I have had the privilege of observing Colonel McNeill both personally and professionally through the years, and the one consistent has been his steadfast and resolute leadership.  He is well-regarded as decisive, dedicated, and determined in all that he does.  Colonel McNeill is soft-spoken with a kind and compassionate demeanor that should not be mistaken for weakness.  His strong moral and ethical character is evident as he leads the State Highway Patrol through some very challenging times in the history of this state, nation, and the law enforcement profession.”

One of the most recent challenges McNeill has faced has been guiding the NCSHP efforts during the COVID-19 crisis.  Due to the nature of law enforcement work, NCSHP officers take significant risks every day by just doing their job.  The recent COVID-19 crisis has only increased those risks.  According to McNeill extra precautions are now being taken to protect both its members and the public.

“Although the Highway Patrol has made distinct operational modifications in response to this unprecedented medical crisis, our mission to safeguard the public remains our top priority,” McNeill said. “Our members are on the frontlines protecting and serving their communities while working to stay safe themselves.”

McNeill advised citizens to be patient and adhere to all executive orders provided by the Governor’s Office to reduce potential exposure and spread of the virus. “Currently, the biggest thing citizens can do to assist with law enforcement’s public safety mission is to shelter at home and limit movements outside of their homes to essential needs,” he stated.

McNeill dispelled a circulating rumor about traffic stops during the state’s mandated stay-at-home order.  “While our objective to ensure public safety continues to be the highest priority, our agency is not conducting traffic stops for the purpose of determining if a person is engaging in essential travel or is a North Carolina resident,” he said.

He did note that motor vehicle laws and other hazardous violations will continue to be strictly enforced for the safety and well-being of all who share the roadway. “Ultimately, the public can help our members avoid potential risks of COVID-19 exposure by voluntarily complying with the law,” he said.

McNeill knows all too well that there are always risks associated with law enforcement.  In the three years he has served as Patrol Commander, McNeill has had the unfortunate task of burying six active State Troopers.  “The most pressing challenge that I face on a daily basis is wanting to make sure that our Troopers remain safe and that they make it home to their families each and every day.”

Family is important to McNeill. He has been married to his wife, Thevesa Fennell McNeill, for 22 years. They have three children, a son, Logan age 19, as well as 16-year-old twin daughters, Morgan and McKenzie. McNeill thinks of his family every day as he puts on his pressed and creased uniform.  Never far from his thoughts is his own mother, whose untimely death so many years ago, led him down a fulfilling career path where he dedicates service above self. He also often reflects on the opportunity he has to work together with members of the Patrol to write the next chapter in the agency’s history.

“I am also grateful that God has given me this opportunity to serve in this capacity and will continually pray for His guidance, direction, and wisdom to help me fulfill my leadership responsibilities as Patrol Commander.”