MOUNT OLIVE- When the world seems full of too much negativity and you don’t know how to fix it, University of Mount Olive Alumnus Eric Godwin advises to start with the things you can do yourself.  “Be the person who wants to give back to society. Be a role model for your friends, family, and community. Be a mentor to someone who needs it,” he said.

Godwin has taken his own advice to heart.  The thirty-one year old has written a book entitled #ImpactMyLife:  Being the Change. He came up with the idea after becoming frustrated with negative social media posts.  “I wanted to create a foundational tool for people to start loving each other again and making a difference,” he said. “The purpose behind, #ImpactMyLife, is to create a transformation in the way each person impacts another’s life, which in turn positively impacts your own life. This book is for anyone who has contemplated the thought, ‘I want to make a difference, or, I wish I could do something more.’”

Godwin admits that writing a book was no easy task.  “I struggled to maintain motivation,” he said.  He also grappled with perception issues.  “In the back of my mind, I had self-doubt because undertaking a project such as writing a book makes you very vulnerable,” he confessed.

Remembering the advice of Dr. Sandy Maddox, UMO’s Dean of the School of Agriculture and Biological Sciences, Godwin said, “Dr. Maddox saw the leader in me that I didn’t know existed. Whenever I start second guessing myself or having thoughts about what others might think, I always think of what she told me all those years ago, which was, ‘Show people who you really are, or they will develop their own image of you.’”

Godwin shared that he wants people to perceive him as a humble person that loves teaching and wants to make a difference.  “My book shows that reality,” Godwin said.  “I want spreading kindness to become the reality for others as well. We can do that if we work together.”

In his book written for individuals 15 years of age or older, Godwin addresses social change.  “The goal is to spread kindness and service across cities, towns, and communities around the world one social media post at a time.”  He invites readers to join the movement of making a difference in other’s lives by doing simple tasks such as designing a kindness rock, donating seeds to an agriculture program, or reading to children, among other things. Divided into 52-weeks, readers are invited to complete assignments, reflect on the experiences, and share their adventures on their favorite social media platforms.

According to Godwin, his background, in agriculture and specifically in FFA, has been a launching pad for getting his books into schools.  “I know some agricultural education programs are using it to help bring service to their FFA Chapters and other people are doing it on their own,” he stated.

Godwin is a native of Dunn, North Carolina, currently residing in Manassas, Virginia, with his wife, Channing, and son, Lucas Smith Godwin. He is a 2007 graduate of Midway High School, where his passion for agricultural education and FFA began. He graduated from the University of Mount Olive in 2011 with a bachelor of science degree in agriscience education and graduated with his master of science degree in agricultural education from North Carolina Agricultural and Technical State University in 2014. He currently teaches science at Grace E. Metz Middle School.

Godwin has received numerous awards over his career, including WITN Teacher of the Week (2013 2014), Honorary State FFA Degree (2014), and the North Carolina Agriculture Teachers Association (NCATA) Northeast Region Agriculture Teacher of the Year in 2018. He has served on numerous committees for the NCATA and was selected to attend the National Agriscience Teacher Ambassador Academy in 2015. When he’s not working, Godwin enjoys traveling with his wife, spending time with family and friends, hunting, fishing, and vacationing at the Outer Banks of North Carolina.

#Impact My Life can be purchased from Godwin’s website at www.ericgodwin.com or through Amazon, Books-A-Million, Barnes and Noble, Walmart, or Target. 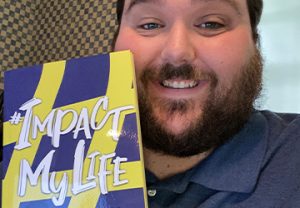 UMO to Offer New Degree in Aviation and Business Management