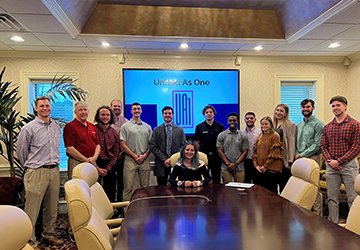 MOUNT OLIVE – Starting a new business can be intimidating. Not so for students in the Business 325 Practicum course at the University of Mount Olive (UMO).  As part of the requirements of the course, students are tasked with forming and running a business.  The process prepares them for real-world challenges and solutions.

The students in this semester’s upper level course, led by Dr. Anamaria Dickson, chose to create a t-shirt company utilizing a design that the group created to represent unity.  Each of the 11 students chose different roles and responsibilities to operate the business.

“We thought that the name ‘United as One’ perfectly embodied our mission of forming tighter, more close-knit bonds with our campus community,” said Treser.

As the final step before production, the students presented their business plan to and sought a loan from Southern Bank in Mount Olive.  The proposal and loan were approved.

According to Jarrid Johnson, an accounting major from Seattle, WA, the business needs to sell approximately 50 t-shirts and 25 crewnecks to break even and pay back the $1,600 loan.  “Any profits made will go into a scholarship fund for future UMO Tillman School of Business students,” said Seth Eaton, a finance major from Bluffton, SC.

“A useful piece of advice gained from the Southern Bank executives was to plan as much as possible,” stated finance major Tristen Dempers of Ontario, Canada.  “It is impossible to predict all potential risks when starting a business, so the Southern Bank executives emphasized the importance of creating contingency plans in case something happens.”

In charge of marketing the shirts, Kenshawn Dixon, a marketing major from Grifton, NC, noted that the shirts will be sold from March 25-April 29 at a cost of $15 for t-shirts or $30 for crew necks.  “People can contact us through direct messaging on our Instagram account @UnitedAsOne325 to place an order,” he said.

“College lectures and labs are useful tools in learning, but understanding the practical applications of what you are learning really puts things in perspective,” said Dixon. “Participating in a class such as this one has really opened my eyes to what interests and passions I have in the world of business.” 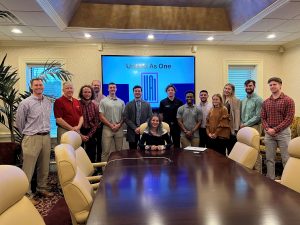