WASHINGTON – Gwen Best, a student at the University of Mount Olive (UMO) Washington location is the first recipient of the Louise P. Kidwell Scholarship.

Best, an accounting major, is employed as an accounting technician at East Carolina University (ECU). When she began her job at ECU, she was strongly encouraged to go back to school. She chose UMO because of the Christians values it upholds, and she attends through the one-night-a-week program.

Best has been impressed by the level of professionalism and encouragement she receives at UMO. She believes that UMO Washington faculty and staff are a perfect example of what it means to care for students and guide them to success.

Best plans to graduate in May 2018 and hopes to obtain a job as an accountant. She believes that receiving the Louise P. Kidwell scholarship is a crucial stepping-stone in achieving that goal.

“Receiving this scholarship has given me the opportunity to truly follow the values of what the University of Mount Olive is all about – transforming lives,” she said.

When reflecting on her time at UMO, Best remains thankful for her family and friends who have supported her even when things seemed difficult. Her faith, family, and friends pushed her to persevere.

“Never give up on your dreams. No matter your age, anything is possible,” she said.

The Louise P. Kidwell/H&R Block Accounting Scholarship Fund provides scholarships for worthy and qualified accounting majors at UMO Washington. Recipients must demonstrate strong evidence of personal integrity, moral character, good citizenship, academic promise, and a sincere commitment to attaining an education. The award amount is $250 for the fall and spring semesters. Keith Kidwell established the scholarship fund to honor the memory and legacy of his mother, Louise P. Kidwell,

“I wanted the scholarship fund to be used to benefit students with the same passion for accounting that my mother embodied on a daily basis,” Kidwell said.

Louise P. Kidwell began working with H&R Block in East Rutherford NJ in 1969. Accounting and taxes were some of the passions in her life. She became one of the first women to serve as a Corporate Controller for a major firm in New York City. After joining H&R Block, she quickly rose through the ranks to the level of District Manager of the Paterson NJ district, where she oversaw the staff of some 12 offices and the preparation of 25000 tax returns per year. In 1979, she relocated to Washington NC with her family and opened the H&R Block franchise locally. Mrs. Kidwell owned and operated the Washington office until her death in August 2007. All of her children, most of her grandchildren, and one of great grandchildren have or are working with H&R Block. 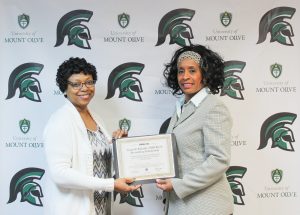 UMO Theatre to Present “You Can’t Take it With You”