University of Mount Olive > News > 67-year-old College Graduate says, “If I can do it, you can too.”

JACKSONVILLE – Mary James is a 67-year-old wife, mother, grandmother, great grandmother, Sunday school teacher, and tutor.  On May 5, she will finally add college graduate to the list.

James has always wanted to earn her college degree, but life kept getting in her way.  Like many married couples, James and her husband, Nelson, were focused on supporting their family.  By 1985, the couple had four children ranging in age from 4 to 14.  Although life was busy in their household, James had decided it was time for her to refocus on getting her college degree.  She had enrolled at Costal Carolina Community College (CCCC) and was taking several courses.  Then she became sick with what she thought was a severe virus.  To her great surprise it was not a virus at all, rather she was pregnant at the age of 35 with fraternal twins.  A Godly woman, James saw the humor in the fact that her plans are not always God’s plans.  She once again set aside her college aspirations and refocused her energies on raising her growing family.

To be close to her children, James took a job with Maple Hill Elementary school as a teacher assistant.  Her career in education spans 25 years with Pender County schools as a Reading Tutor/Parent Volunteer Coordinator.  Once her children were grown, it seemed only natural for James to pursue her college degree in the field of education with the ultimate goal of becoming a teacher.  In 2014, she re-enrolled at CCCC with that goal in mind.  However, James felt something was missing.  She talked with her pastor and decided God was calling her for a greater purpose.  In January of 2015, James enrolled at the University of Mount Olive in Jacksonville with the goal of obtaining her bachelor of science degree in religion.

“I know God has called me to preach,” she said.  “He has also given me the gift of singing His words of praise.”

A member of Maple Hill African Methodist Episcopal Church, James is a Sunday school teacher and member of the ministerial staff. She helps prepare morning worship, sings, reads scripture, prays, and often preaches God’s word.  On May 11, she will become an ordained minister, thanks to her UMO education.

James’ family was not only supportive of her pursuit of a degree in religion, but they were also excited that she would finally achieve her goal of becoming a college graduate.  Then, two years into the program, her husband was diagnosed with colon cancer.  Another obstacle was placed in James’ path.  However, she remained steadfast in her studies and in her faith.

“My faith is and will continue to keep me strong,” James said.  “My favorite Bible verse is Psalms 23, ‘The Lord is my shepherd; I shall not want. He make me to lie down in green pastures: He leads me beside the still waters. He restoreth my soul: He leadeth me in the paths of righteousness for His name’s sake.’”

With graduation just days away, James is feeling many things – relief, fulfillment, and gratitude are at the top of the list.

“There are not enough words to explain how UMO has transformed my life and my education,” she said.  “This has been a long hard journey, but God has blessed me to be able to juggle my studies and care for my husband, who is now cancer free.   Because of the transformation I have had at UMO, I can now stand before the congregation at my church and know how to carry myself in the study of God’s word. There are so many people to thank.  I am so thankful to God, my family, and my church.  I am also appreciative to my advisor, Christy Cox, who guided me, and to my professors like Dr. Neal Cox, who inspired me with his lectures.  They have all helped me.”

Mary and Nelson James live in Maple Hill.  They have been married for 49 years.  They are the proud parents of Evelyn James Grady (47), Gerald James (46), Nelson Lamont James (44), Ryan James (37), Lendrick James (32) and Kendrick James (32).  They have 10 grands.  Mary is the founder of the NC Willing Workers Foundation, an organization to train small farmers into growing their own vegetables and livestock.  She has received several awards and recognitions including the NC Association Teacher Assistant of the Year Award, the General Nutrition Education Service Award, the Certificate of Appreciation from the African Methodist Episcopal District Conference Award, and the NC A & T State University 2008 Small Farmers of the Year Award.

When asked what she will be thinking as she walks across the stage to receive her diploma on May 5,  James said, “I will be thinking of and thanking God, my family, my church family, and my new UMO family for all the strong support they have given me on my journey to become a college graduate. I hope I can be an inspiration to others, because I truly believe that you are never too old to learn.  Just look at me, if I can do it, you can too.” 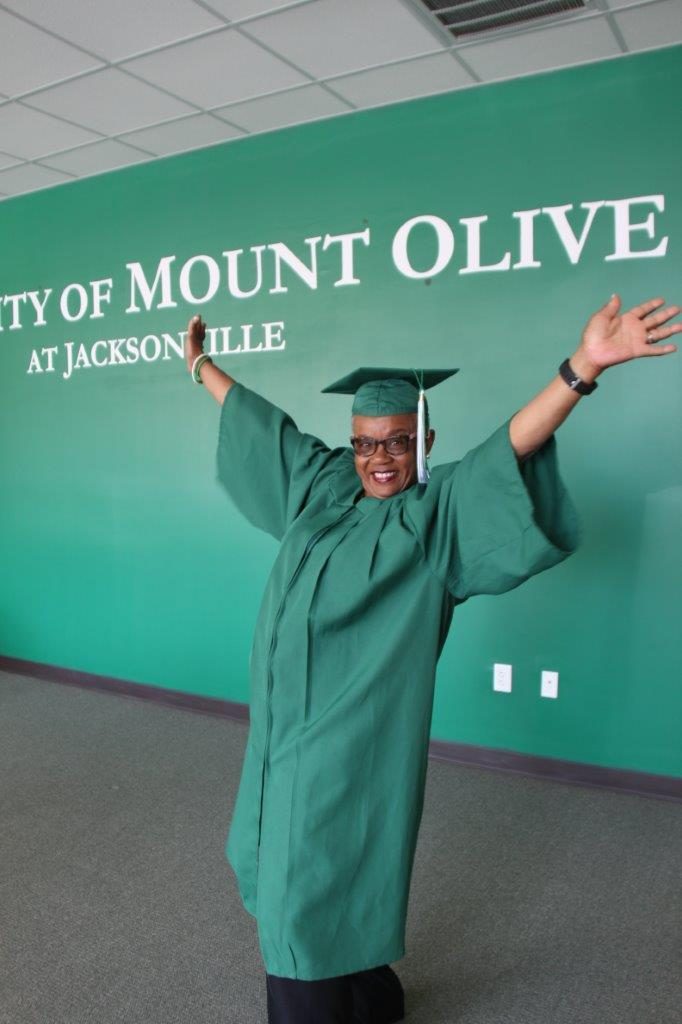