MOUNT OLIVE – The University of Mount Olive (UMO) is home to students from a variety of backgrounds, nationalities, and special interests. For students Kristin Power of Cleveland, North Carolina, Benedetta “Bene” Abbate of Westchester, New York, and Hannah Kirk of Northallerton, a market town in North Yorkshire, England, UMO has served as the foundation for an incredible friendship.

The three met in 2014, during their freshmen year at a pre-soccer season team bonding exercise. Since then the trio have become roommates and best friends, each bringing a unique perspective and culture to their friendship.

Abbate, whose family owns an Italian restaurant and pasta shop in New York, has introduced her friends to various Italian foods and cultures. Kirk has taught the girls numerous British words and phrases, and has developed within them a common love for English candies.  Being North Carolina born and bred, Power has helped her roomies decipher southern words and phrases, and introduced them to southern cuisine like BBQ and banana pudding. She has also served as a source of comfort for her friends who have been far away from their families.

Known as the “mom” of the group, Power drives her friends to doctor’s appointments and helps with local errands.  When homesickness settles in, Power takes her friends back home with her to Cleveland for a home cooked meal and family bonding time.

Power’s rural Johnston County neighborhood surrounded by crops was a stark contrast for Abbate, who spent her childhood in the New York City suburbs.   Abbate said, “I have learned to love and respect the rural lifestyle.  The strong friendships I have with Kristin and Hannah have given me a home away from home.”

Kirk also grew up in a rural area.  However, she lives within walking distance from a train station where she can travel two hours south to London, or two hours north to Edinburgh.  “Coming to UMO was a huge change for me,” Kirk said.  “It was very different not having the freedom of public transportation.  I am so thankful that Kristin has been our friend and chauffer for these past four years.”

Although there are significant cultural and geographic differences between the “besties,” it is the similarities, not the differences that have helped the girls find their common ground.  They are all family-oriented, honest, caring, and have a strong desire to perform well both athletically and academically.

“We are all good students and understand the importance of academics,” Kirk said.

Kirk is majoring in psychology and minoring in biology. She is President of Psi Chi, a member of the Student Athlete Advisory Committee, and a student tutor.  After graduating from UMO in May, she plans to attend Durham University, a prestigious school in north England, where she will study cognitive neuroscience.

Inspired by her father, a successful businessperson, Abbate is majoring in business management with a minor in marketing. She is the current Social Media and Marketing intern at UMO and is a member of Phi Beta Lambda. After graduation, she plans to return to New York to seek a job in marketing or sales.

Power is pursuing a degree in biology with a minor in chemistry.  She is a member of the Beta Beta Beta biological society. Her plans include graduate school and eventually working in the medical field.

From the foods they enjoy to the landscapes of their hometowns, Power, Abbate, and Kirk have been shaped by different cultures. However, they believe that having the opportunity to grow close and learn about one another has been the most rewarding aspect of their time at UMO.

“I don’t think we’ve really had to ‘overcome’ our differences; we embrace them and laugh and learn together,” Kirk said.

“The strong friendships I have with Kristin and Hannah have given me a home away from home at Mount Olive,” Abbate said.

“I am so thankful to UMO for helping me form friendships with Bene and Hannah,” Power added.  “I know I will always have a place to visit in New York and England.  Even if soccer had not brought us together, I think we would have met and become lifelong friends…some things are just meant to be.”

The University of Mount Olive is a private institution rooted in the liberal arts tradition with defining Christian values. The University, sponsored by the Convention of Original Free Will Baptists, has locations in Mount Olive, New Bern, Wilmington, Goldsboro, Research Triangle Park, Washington and Jacksonville. For more information, visit www.umo.edu. 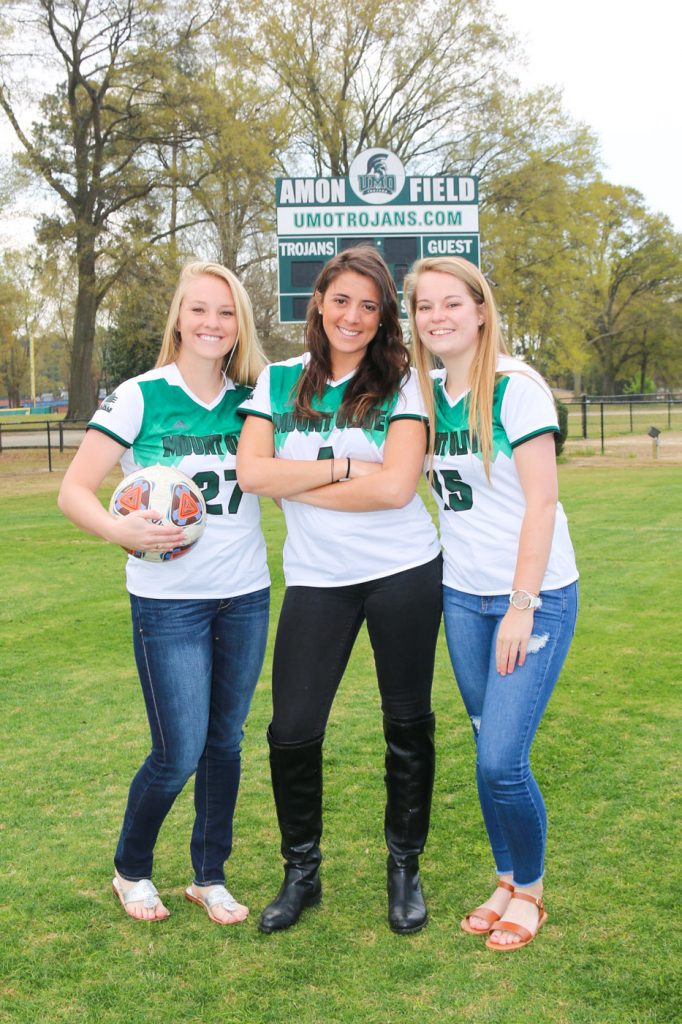