MOUNT OLIVE- Assistant Chief of Detectives Mark Scott with the Onslow County Sheriff’s Office (OCSO) has a saying on his office wall, “Work hard, Be kind, and Stay Humble.” It is a motto he lives by. The Onslow County native is proud of his roots and his community. He interacts regularly with members of the United States Marine Corps at Camp Lejeune, and he appreciates their service and sacrifices. Scott also understands that same kind of commitment is required from members of law enforcement. It is an understanding that is personal and generational, as many of Scott’s family members have worked in law enforcement for their entire lives.

Scott’s own career started when he was 20 years old, taking Basic Law Enforcement Training (BLET) classes. “I was the ‘kid’ in the class,” he recalled. “However, I was not treated any different.”

Scott graduated with his BLET certification in 1999, and was hired by the OCSO to work as a jailer. “I will freely admit I was scared at first, but it did not take long to realize that the inmates were just like me,” he said. “They were regular people who had made poor decisions.”

After a year, Scott began working as a patrol deputy, learning the basics. “I liked to work calls until an arrest was made,” he said. “Looking back, it seems I was training myself for detective work.”

Following a two-year stint as a civil deputy working the Warrant Squad and doing prison transports, Scott was asked to join the Investigative Division. He was 27 at the time. “I knew I would be going into a unit where I would be much younger than most,” he recalled. “However, the senior detectives treated me fairly and taught me how to get the job done right.”

Scott has been a detective since the spring of 2007. The appeal of putting the puzzle pieces together to solve a case has always captivated him. “Detective work can be difficult and time consuming, but playing the mental game with a suspect can also be thrilling,” he shared.

Since starting in investigations, Scott has worked his way up from the rookie detective, to Sergeant of Detectives, to Lieutenant of the General Crimes Unit, to now serving as Assistant Chief of Detectives, covering the General Crimes Unit, Special Victims Unit, Narcotics Unit, and Crime Scene Investigations. He has either led or participated in the investigation of 46 homicides, conducted hundreds of interviews, and worked hundreds of cases. In addition, Scott attended polygraph school in 2013, allowing him to work as polygraph consultant for the Jacksonville Department of Public Safety and teach a class on Field Interviews and Interrogation for Coast Carolina Community College’s BLET.

Having gained as much knowledge and experience as he could on his own merits, Scott decided it was time to return to the classroom. In May of 2016, at the age of 37, he enrolled at the University of Mount Olive in Jacksonville, seeking his bachelor’s degree in leadership. “I already had 16 years of experience in the field, so I wanted to diversify things,” he explained.

At first Scott was worried that he would not be able to balance his busy work schedule and his studies. However, with hard work and determination, he completed assignments at home, during class, and sometimes while out of town investigating case leads. “I have used many of the theories and teachings from instructors to become a better leader,” he said. “I have been able to use a number of insightful concepts and models to work out issues with others and to bring about change within my department.”

His studies have also opened his eyes to new interests. “One of the things that I did not expect to learn was that I love writing,” expressed Scott. “As a detective, I write long reports that detail a chain of events. However, at UMO, I discovered I also loved to write papers and short stories. I hope to continue my writing in the future.”

Scott is on track to graduate on August 17, and he will do so with honors. His future plans include continuing his career with the OCSO until retirement. Then, he plans to potentially work for the state law enforcement, or open his own private investigator business and polygraph school.

It seems the motto on Scott’s office wall is more than a decorative addition. It is a reflection of his drive to work hard, and his determination to apply himself to the job at hand to be the best that he can be.

Scott and his wife, Trisha, have three young sons, Cameron, Ethan, and Brody. 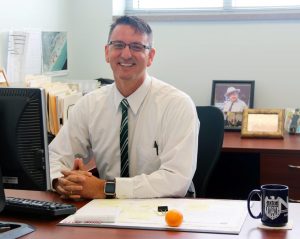 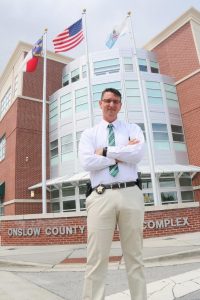