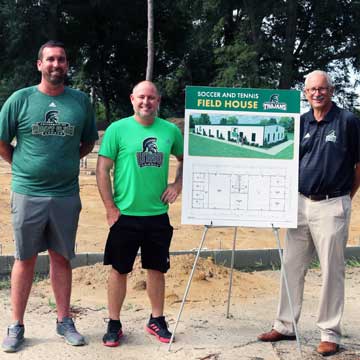 MOUNT OLIVE- Construction is well underway at the University of Mount Olive for its new soccer and tennis field house. The facility will be named in memory and in honor of longtime Wayne County residents Jay Bundy and Jay Bundy Jr. Both father and son have received the Distinguished Service Award from the Mount Olive Jaycees for their contributions to the civic and business community of Mount Olive.

The Jay Bundy Field House will include team locker rooms, coaches’ offices, storage, and public restrooms for spectators of soccer, tennis, and baseball. “A team locker room is a point of pride for a team,” said UMO Vice President for Athletics Jeff Eisen. “It is a gathering spot for a team to hang out and bond, to have meetings, and to get ready for a game. It is a place to make memories.”

According to Eisen, the development of the soccer and tennis programs will be enhanced by the construction of a field house. “It will also help with recruitment and retention of student- athletes,” he said.

“Not only will this facility help us in recruiting,” said Men’s Soccer Coach Sean Brennan, “it will also provide a private home for our athletes where we can work together on team building, match preparation, and video review. Having the Field House next to our fields only enhances the other great facilities that we already have at UMO.”

The Jay Bundy Soccer and Tennis Field House will be located near the University’s soccer game and practice fields, as well as its six tennis courts. The projected cost of the facility is approximately $300,000. The project is made possible in part by Jay and Susie Bundy. Additional funding has been supplied by the UMO Trojan Club, friends of the Bundy family, and other donors.

Head Women’s Soccer Coach Sharif Saber added, “The Jay Bundy Soccer and Tennis Field House will not only serve as a wonderful home for our student-athletes, but it will also serve as a physical representation of the fantastic growth we have been experiencing at UMO on a daily basis.”

The UMO men’s and women’s soccer teams boast approximately 60 total student-athletes, while men’s and women’s tennis have about 20. The players come from all across North Carolina, the US, and several foreign countries.

“The Jay Bundy Field House will be a nice addition for our soccer and tennis programs,” said Tennis Coach Kevin Coghill. “We would like to thank everyone involved in getting this project together, especially the donors.” 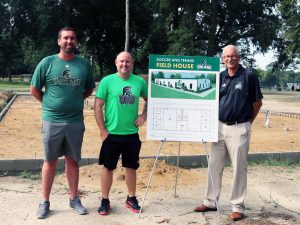