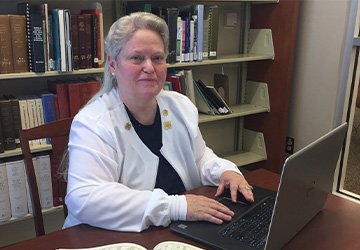 MOUNT OLIVE- Bronda Walker grew up in a middle-class, Christian family with two older brothers and two younger sisters.  Her father, who only completed the third grade, became a self-made, successful businessman, who owned his own construction company. Her mother, the youngest of nine children, graduated from high school, got married, and did the books for the family business.  Hard work and the importance of an education were instilled into Bronda from an early age.

By the time Bronda was 14, she was working the cash register at a local dry cleaners and serving as a volunteer candy-striper at the hospital.  From tenth grade until her high school graduation, she had a part-time job as an occupational therapy aide in a rehabilitation center.  It was a positon made possible through the vocational industrial careers program at her high school. “Through these opportunities, it was natural for me to want to become either a veterinarian or a nurse,” she said.  At the encouragement of her parents, Bronda chose to pursue a career in nursing.

After high school, Bronda enrolled in a three-year registered nurse diploma degree program. Simultaneously she worked part-time at nights and on weekends as a hospital nursing assistant. In 1976, she completed her RN degree from Watts Hospital School of Nursing in Durham, and holds national board certification as a gerontological nurse through the American Nurses Credentialing Center since 1983.  Shortly after completing her RN, Bronda married the Reverend W. Harold Burton.  Being a pastor’s wife, was a big responsibility, and required a great deal of time in addition to her work as a geriatric night nurse.  Bronda felt the need to complete her bachelor’s degree, but family, church, and work responsibilities always came first, delaying her goal.

When Bronda was just 48 years old, she became a widow, when her husband died unexpectedly following a brief illness.  “For a while, I lost a part of my identity,” she recalled.  With four children, the youngest being 10 years old, Bronda was unsure of how to provide for her family.  “Through many prayers and knowing I needed to care for my children, I was able to get through day-by-day,” she said.  Eventually Bronda returned to work and began doing the daily tasks that had seemed insurmountable.  “I was grateful for the support and love of my family, our church family, and our friends during this time,” she admitted.

As Bronda adjusted to the loss of her husband, and her children adapted to the absence of their father, the institution of new normalcy occurred.   Although their path was not without its potholes, detours, and roadblocks, they survived and became stronger.  In 2006, God provided Bronda with a new life partner.  “I had no intention or desire to become involved in a new relationship,” she admits.  “Little did I know, that God had different plans,” she smiled.  Bronda remarried to Marvin M Walker, a man known and respected by her children.

As Bronda’s children grew, graduated from high school, and started their own lives, her desire to complete her bachelor’s degree was rekindled.  It was about the same time, that the University of Mount Olive was promoting their online RN to BSN degree program.  So, after 36 years, Bronda returned to the classroom.  “I sometimes found being the oldest student in the class to be exhausting and at other times, humorous,” she admits.

At UMO, Bronda took the Applied Statistics for Nurses course in conjunction with attending a state-wide sponsored Dementia Institute.  “Jointly, these two offerings opened my eyes to the importance and potential of statistical data in providing the necessary support for the development of sound innovation strategies in nursing,” she said.

With much support, encouragement, and meeting multiple deadlines, many times, within seconds of the assignments’ closing, Bronda graduated from UMO’s RN to BSN program with a 4.0 GPA in 2013.  She went on to graduate with honors earning a master of science degree in nursing (MSN) with a concentration in nursing informatics from Duke University School of Nursing in 2016.  Bronda continued her Dementia Institute work and reached out to Duke University School of Nursing to explore a partnership between the two entities.  “The collaboration has resulted in several mentoring opportunities, research projects, the publications of several study results, and my teaching responsibilities within UMO’s School of Nursing,” Bronda said.

Bronda joined UMO as an allied faculty member in October of 2017.  “I enjoy sharing my knowledge of the application of statistics in healthcare and everyday life with the next generation of health care providers,” she said.  “When nurses realize the tasks and duties they perform each day are evidence-based, the light bulb comes on and grows brighter.”

On June 4, 2021, at the age of 66, Bronda retired after 45 years of practice in gerontology and 25 years with her current employer as a full-time nurse consultant.  Instead of a party or special recognition, she asked that gifts be made for a scholarship to the new pre-licensure nursing program at UMO.  “My life has been transformed by UMO,” she said.  “With my UMO degree, I have been able to build on a foundation on knowledge that has led me to provide meaningful contributions to the improvement and advancement of the nursing profession as an individual, as a mentor, and as a leader.”  As a result, Bronda wanted her retirement gift to pay it forward to the next generation of nurses.  “Through this gift, another individual will have the opportunity to pursue a nursing career and the advancement of the nursing profession may continue,” she said. 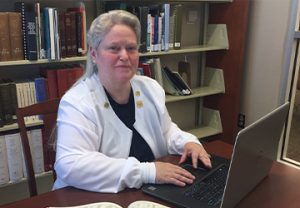