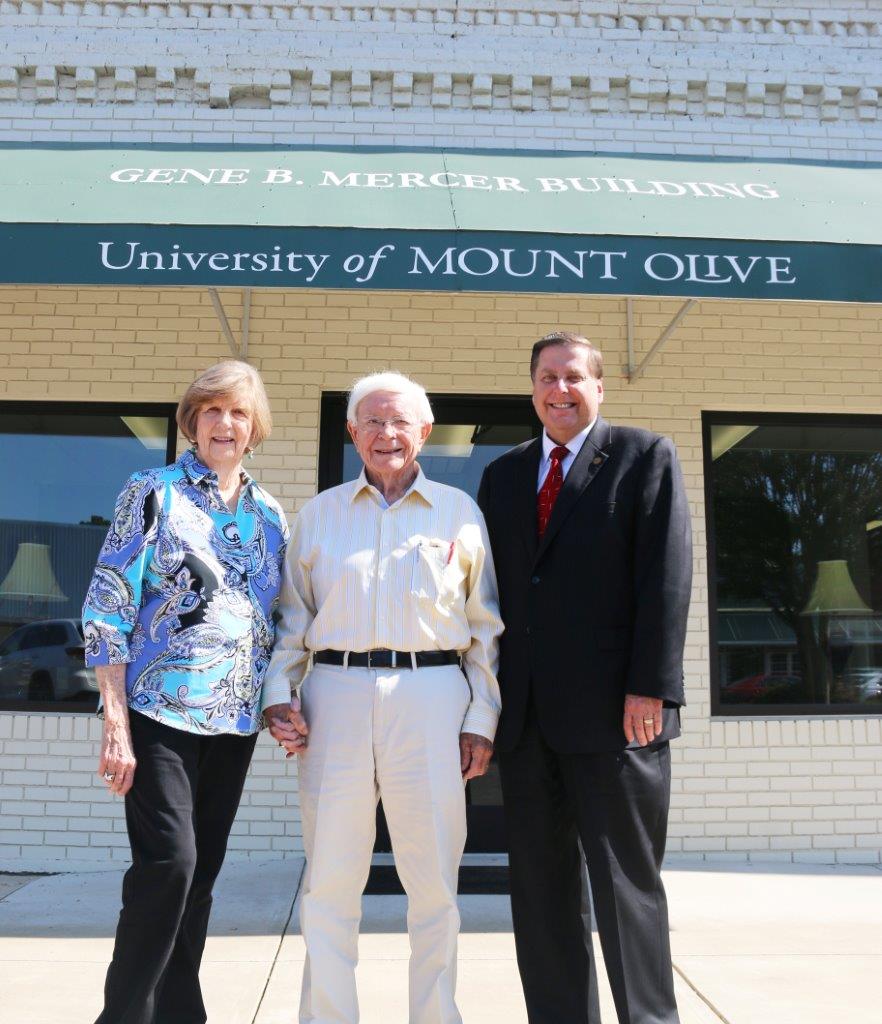 MOUNT OLIVE – Angus and Joyce Mercer recently toured the University of Mount Olive’s downtown offices, which were previously occupied by Southern Furniture and Interiors. The building was once owned and operated by Angus’ brother, the late Gene B. Mercer. As the couple of 66 years walked through the space, they reminisced about their beloved Gene, often sharing a funny story or two, and even a few tears as they fondly recalled Gene’s presence in their lives.
“He would be so happy to know that this building is being utilized in this way,” Angus said. According to Angus, Gene was a big fan of education, loved Mount Olive College, and spent most of his adult life in the very space now named in his memory.
Angus and Joyce made a significant gift to the University as a way to honor Gene’s memory and carry on his legacy. “We knew we wanted a meaningful and lasting way to keep his name and his memory alive,” Angus said. “This turned out to be the perfect way to do so.”
Angus noted that Gene’s love of Mount Olive College stemmed from his 18-year career as a math professor at the institution from 1967 to 1985.
“My sister, Sue, and my brother, Gene, loved learning and received degrees from NC State University,” Angus shared. “I always admired their great scores in college!!” he added.
Angus was born the oldest of his two siblings, with a span of 15 years between himself and Gene, the baby of the Mercer brood. They were born with humble means on a tobacco farm in Duplin County to Frank and Lillian Thomas Mercer. Though the age difference seemed great, the brothers often found themselves side-by-side on hot summer afternoons barning the state’s number one cash crop at that time. It was during those formative years that Angus developed his passion for agriculture.
Angus attended and graduated from NC State University where he received a bachelor of science degree in agricultural engineering. He went on to work for Contractor Service, later purchasing the company and changing the name to Contractor Service and Rentals (CSR). Angus Mercer and CSR were one of the first companies to offer the option of heavy construction equipment rentals. He grew the business to eight stores, and later sold it to Grace Equipment Co. He continued as president of the southeast division which he increased to 18 locations in three states. In 1990, he began Mercer Equipment Co. and later sold it to United Rentals, the largest rental construction company in the world.
While Angus was busy growing the business, Joyce managed the family home tending to their four daughters, and supporting her husband’s business acumen.
“We have enjoyed a good life,” the 92-year old said as he looked to his wife. “God has truly blessed us with a large, Christian family. That is one of the reasons we like to share with others. I can honestly say that we have never missed anything that we have given away. I am glad we are blessed to be in the position to contribute to the University of Mount Olive while also honoring Gene’s memory.”
Reaching for her husband’s hand, Joyce said, “It really is emotional for me too. I never had a brother of my own. Gene was like a brother to me and we loved him dearly. I think he would be so happy with how this has all worked out.”
The University of Mount Olive is a private institution rooted in the liberal arts tradition with defining Christian values. The University, sponsored by the Convention of Original Free Will Baptists, has education service centers in Mount Olive, New Bern, Wilmington, Seymour Johnson Air Force Base, Research Triangle Park, Washington, Jacksonville, and online. For more information, visit www.umo.edu.