MOUNT OLIVE- Veronica Kirkland was born and raised in the Big Apple…Brooklyn to be exact, where the city and the people never sleep. With its perpetual motion and vast populations, New York City offered Kirkland many influences, both good and bad, and she could have chosen either path. Instead of letting outside pressures define her, she used them to become a person of substance and determination.

“I remember as a young girl looking for an outlet,” she said. “The famous gospel artist Hezekiah Walker and Love Fellowship Choir allowed me to escape the crime, drugs, and the city life that was always in full motion. I am truly grateful for his youth ministry which gave me a place to escape.”

When Kirkland was in high school, her parents, Gene and Ella Godley, who were originally from Washington, NC, moved their family back to North Carolina. “I thought it was the end of the world,” Kirkland admits. However, she soon fell back in love with her southern heritage, the people, and the taste of southern cuisine. “My mother loved to cook, and she cooked enough to feed the neighborhood,” she recalled. “It was a rule in our home that my mother had to meet our friend’s parents, and those meetings often occurred around the dinner table. I may have been born in Brooklyn, but I was raised with southern values.”

Sadly, Kirkland’s father died at an early age. However, as a mechanic shop owner, he was her first entrepreneurial role model. In fact, it was her dad’s influence that led Kirkland and her husband, Brad, to start their own successful family-owned management business, KHMS, LLC. She is also the Human Resources Director for a startup electrical staffing company, Sortek, which was started by her first cousin. You would think that these two ventures, along with raising four children would be plenty fulfilling for this Johnston County resident. But, always looking to further herself, in 2015 Kirkland decided to pursue her bachelor’s degree at the age of 47. She enrolled in the University of Mount Olive’s (UMO) business management program.

“I decided to return to school for many reasons,” she shared. Chief among those reasons were marketability and fulfilling a lifelong goal. “With my children grown, my eldest son kept asking me when I was going to finish my degree. It brought him great joy to see me studying at the same time he was working on his master’s degree.”

It was also very important to Kirkland to receive her degree so she could empower and motivate others to be the best version of themselves. “I, myself, am encouraged by seeing other successful minority women, especially women of color, and I want to be the same kind of role model.”

While at UMO, Kirkland has learned many valuable lessons that she plans to utilize in her business. “I will use the degree and the classroom knowledge that I have received during these past four years in many areas including: organization, marketing, cost accounting, and managing the business finances,” she said.

Now 52, Kirkland is quick to admit that it was not always easy, and there were many days that she wanted to quit. However, she hung in there to complete her bachelor of arts degree, and although there will not be a traditional graduation ceremony, due to COVID-19, she plans to have a family watch-party for the virtual graduation ceremony.

“I can’t wait to hear my name during the virtual commencement on September 26, and to share this moment with all my fellow UMO graduates,” she said. “It may not be a traditional ceremony, but then again, my entire educational pursuit has been a bit unconventional, and in some ways, that makes it even more fitting!”

UMO’s virtual commencement will air on Saturday, September 26, at 10 AM. The link can be found on the University’s website at www.umo.edu. 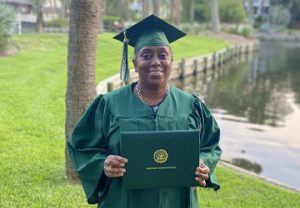