MOUNT OLIVE – Aaron Smith easily admits he is nothing without his faith.

“Without my faith in Jesus every aspect of my life would lack purpose,” he said.  “Jesus gave His life for mine, so I owe Him my entire life.”

Smith lives out his faith daily in everything he does.  He is a 2014 graduate of the University of Mount Olive (UMO), Director of Student Life at Harrells Christian Academy (HCA), and the Connections and Student Pastor at the Vine Fellowship in Clinton.  During the summer, he also works with the Eastern Baptist Association helping with student ministries.

At HCA, Smith wears many hats in his oversight of the middle and upper school student activities, including being disciplinarian and campus pastor.  He also serves as the varsity boys’ soccer head coach and an assistant coach for the varsity boys’ basketball team.  However, his most important role is being able to listen and communicate with students.

“I enjoy getting to plan chapel programs and retreats, but all that means nothing without relationships.  I love when a student comes to my office with a question about their faith, the Bible, or just wants to talk about whatever.”

An added bonus for Smith is that he gets to share his passion for ministering with his wife, Emily.  Emily serves as the HCA upper school Bible teacher.

“It is great that we get to share in this ministry at HCA,” Aaron said.  “It is more than just a job for us.  It is also a chance that we get to point students to the Gospel, even by the example of our marriage.  I would not want to do this with anyone else.”

Smith’s own parents set the example for him growing up.  A 2010 graduate of East Duplin High School, Smith grew up in Beulaville, NC, the son of an Original Free Will Baptist Minister.

“It was a unique experience to live with someone in full time ministry,” he recalled. “Essentially, I job-shadowed a pastor for 22 years.  I learned that if you are in ministry you are always on the clock.  Although the weight of pastoral ministry is heavy and taxing, it was very clear through watching my father that it is worth it.  The early morning study sessions for a sermon or the late nights at a hospital are all worth it if one person decides to make Jesus Lord of their life.”

Although he was the son of a pastor and could say all the right things, Smith’s faith was not always as strong as it is now.

“Until my freshmen year of college, I my faith was based on what I knew, not on what I believed in my heart,” he recalled.  “At the University of Mount Olive, the Lord showed me that things that I had put my hope in were broken cisterns that could not satisfy me.”

Smith remembers the details very clearly.  It was a Thursday night.  He was sitting in his UMO dorm room.  A member of the men’s basketball team, Smith was very frustrated with the team and with the players.  A sport he had always loved was becoming more of a chore than a pleasure.

“I found myself reading my Bible, praying, and asking the Lord why I hated the one thing I used to love,” he said.  “In my frustration, I remember this still small voice breaking through and saying, ‘nothing will work until you have a relationship with me.’ I realized then that not only did the Lord see my sin, but He also saw my loneliness.  God wanted a relationship with me, and I was only able to see that when I came to the end of myself.”

That moment was crucial for Smith’s walk with the Lord.  His relationship with Jesus moved past a one-time experience into a daily relationship.

“My beliefs in Jesus began to give purpose to things God was using to shape my life,” he shared.

Smith graduated from UMO in May of 2014 with a bachelor’s degree in social studies education.

“When thinking about my time spent at Mount Olive, I would say I was exactly where the Lord wanted me,” Smith said.

At UMO Smith spent a lot of time lifting weights, playing basketball, and writing papers and lesson plans.  However, the thing he enjoyed most about his college years was spending time with friends.

“During that season of my life, God gave me a great community of friends who I will never forget,” he shared.

UMO also prepared Smith by giving him the tools to succeed.

“At Mount Olive I learned how to research, prioritize my time, and be organized.  “All of the papers, lesson plans, and exams taught me to do and be prepared for all the things I need in my busy work life.”

Smith’s brother, Jonathan, has followed his example, and is a junior at UMO.

“I can’t speak for Jonathan, but for me, the fact that Mount Olive was founded by the Original Free Will Baptist denomination was not the reason I decided to go,” Smith said. “I went to Mount Olive because that is where the Lord opened the door for me. I believe it is important for high school students who are transitioning to college to ask themselves, ‘where is the Lord opening a realistic door for me to attend?’”

Helping young people work through their faith and find their open doors is what Smith does on a daily basis at HCA and at the Vine.  Smith openly shares his faith and collaborates with students in growing theirs.

“I love that I get to help young people in their walk with the Lord,” he said.

Aaron and Emily Smith live in Kenansville.  Aaron is the son of David and Dawn Smith of Beulaville.  Emily is the daughter of Wayne and Angie Bass of Clinton. 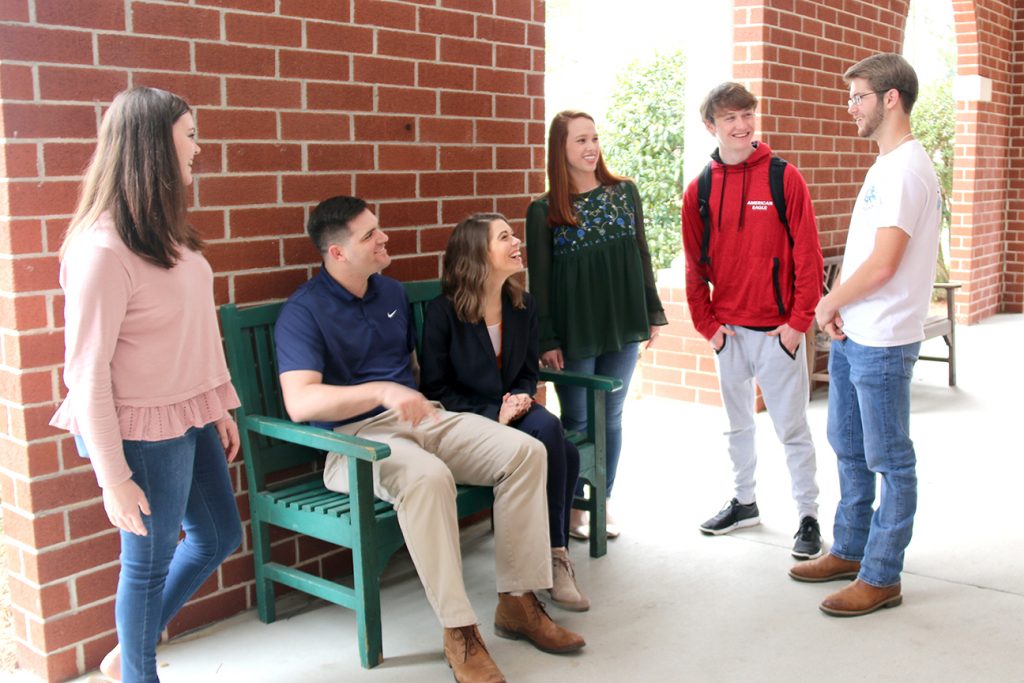 Ministering to students is more than just a job for Aaron and Emily Smith (seated).  It is a chance that they get to point students to the Gospel, even by the example of their marriage. Also pictured (L-R) Jeanna Grace Bowker, GracyPeterson, Kaleb Jessup, and Zack Fussell.