MOUNT OLIVE – It was an evening of reminiscing, recitations, and recognitions at the retirement event for University of Mount Olive (UMO) President and First Lady Dr. and Mrs. Philip P. Kerstetter.

The celebration for Kerstetter, who is retiring at the end of June after nine years as UMO’s fourth president, was filled with personal touches and surprises. Nearly 200 people attended the dinner held at Walnut Creek Country Club in Goldsboro hosted by the UMO Board of Trustees.  Dr. Hope Williams, President of the North Carolina Independent College and Universities, spoke and delivered a letter from Governor Roy Cooper.

Kerstetter received proclamations from the Wayne County Commissioners, the Town of Mount Olive, and the University of Mount Olive Board of Trustees.  UMO Board Chair Earl Worley listed several accomplishments during Kerstetter’s presidency including increasing traditional student enrollment; launching new academic programs and graduate programs; starting online degree programs; strengthening the institution’s finances; signing Articulation Agreements with 17 community colleges; and nurturing the University’s relationship with the Original Free Will Baptist Church.  Worley indicated that campus expansion during the nine years with Kerstetter at the helm has included the construction of three new residence halls; a state-of-the-art track and field/lacrosse complex; expansion of the arts; and the renovation of Rodgers Chapel and the addition of the E. Lee Glover Center for Religious Studies.   “In addition, several new properties were acquired, including the old Sleep Inn, the former Mount Olive High School building, downtown offices for Institutional Advancement, the Pender Building, and Kornegay Farm.” Worley stated.

John Clifton, accompanied by Franklin Gross, sang Fill the World with Love from the movie Goodbye, Mr. Chips. The University of Mount Olive Chamber Choir, under the direction of Jonathan Saegar, sang four selections including an Irish Air titled Quick, the UMO Alma Mater, For the Beauty of the Earth, a song composed by John Rutter and specifically requested by the Kerstetter family.  For the finale, the Chamber Choir ended the evening with a selection titled Irish Blessing. “This song was sung as a prayer for the Kerstetters as they venture off to their next phase in life,” said Saeger. “The final passage of the song states, ‘and until we met again, may God hold you in the palm of his hand.’”

The highlight of the evening was an announcement by Vice President for Institutional Advancement Teresa Hines that the Kerstetter name will forever be etched on the Mount Olive campus.  “Because of Phil and Mary’s unfailing love of students, the University of Mount Olive Board of Trustees has proclaimed that the student apartments which have been known to date as the Station Street Apartments shall henceforth be named the Kerstetter Commons,” Hines stated. The audience erupted in applause.

“I am excited that Phil and Mary’s legacy on campus will long be remembered through the Kerstetter Commons,” said Vice President for Student Affairs Dr. Dan Sullivan. “The impact the Kerstetters have had on our students is impossible to measure. From the moment they first stepped foot on campus, Phil could be seen unloading cars and welcoming families with open arms.  In addition, Mary will forever be remembered for her chocolate chip cookies and motherly spirit.  What other college or university can boast that every freshman student was welcomed into the president’s house for a home cooked meal? At the very heart of what makes Phil and Mary’s time at UMO so special is their ability to connect to our students on a personal level, knowing their names, their hometowns, their parents and their intent to form life-long relationships. I truly hope that our current and future students continue to know just how much of an impact the Kerstetters have made on this campus.”

Taking the podium Mary Kerstetter thanked those in attendance and noted that she and Phil were looking forward to the next phase in their lives – focusing on family, leisure, and travel.

“It has been a long and winding road,” she quoted from a familiar song by the Beatles.  “Along the way, we have met the most incredible staff and faculty, alumni, community friends, and, best of all, students.  I would like to thank all the communities of which we have been members: in Pennsylvania, in Kansas, in North Carolina – for allowing me to pursue my own passions.  I was never treated as just ‘the president’s wife.’ I tried to contribute in my own way to the arts, to politics, and to the circle of women who have been the best friends ever.  I am looking forward to doing that in Pittsburgh.  Thanks, UMO, for the glowing memories to keep us feeling warm and loved as we head to that cold, cold, north.”

In his remarks, Phil also thanked those in attendance.  “I cannot express how overwhelmed I am by this and your presence here this evening,” he said.  “This means so much to me.”

Phil shared that his journey in education started when he was an underclassman at Bucknell University with the next 53 years seeming to, “just fly by,” he noted  “What an incredible privilege we have in our profession to help prepare, direct, and guide the lives of students who are at such a critical stage in their lives,” he said.  “Serving in higher education is such a rewarding experience. We have been able to meet and get to know so many students, faculty, and staff over our career, and we still maintain a great deal of contact with those who we met out at Kansas Wesleyan, as we still maintain contact with the students who we have met here at Mount Olive.  I know we will continue to do so.”

Kerstetter went on to note that UMO has made great strides over the past nine years.  “It has been accomplished because of the efforts of so many people,” he said. “And I really want to acknowledge my Executive Council members, who are the best professionals that I have ever worked with.  There is no doubt in my mind that the future bodes well for this University.  It has been an honor and privilege to be here.  Our memories of each of you, of the University, of the Church, and of the communities will remain with us always as we retire and enter the next phase of our lives.  From the bottom of my heart thank you for the opportunity to serve, thank you for all of your support through the years, and thank you for this wonderful evening.  We will treasure this moment always.  May God bless each and every one of you, and may God continue to bless the University of Mount Olive.” 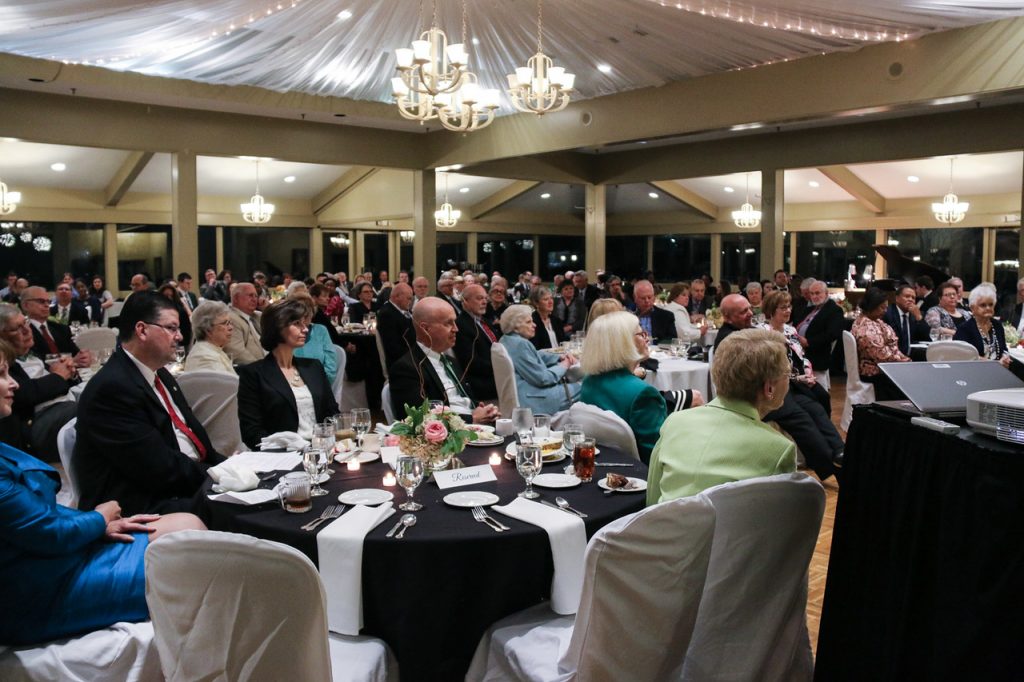 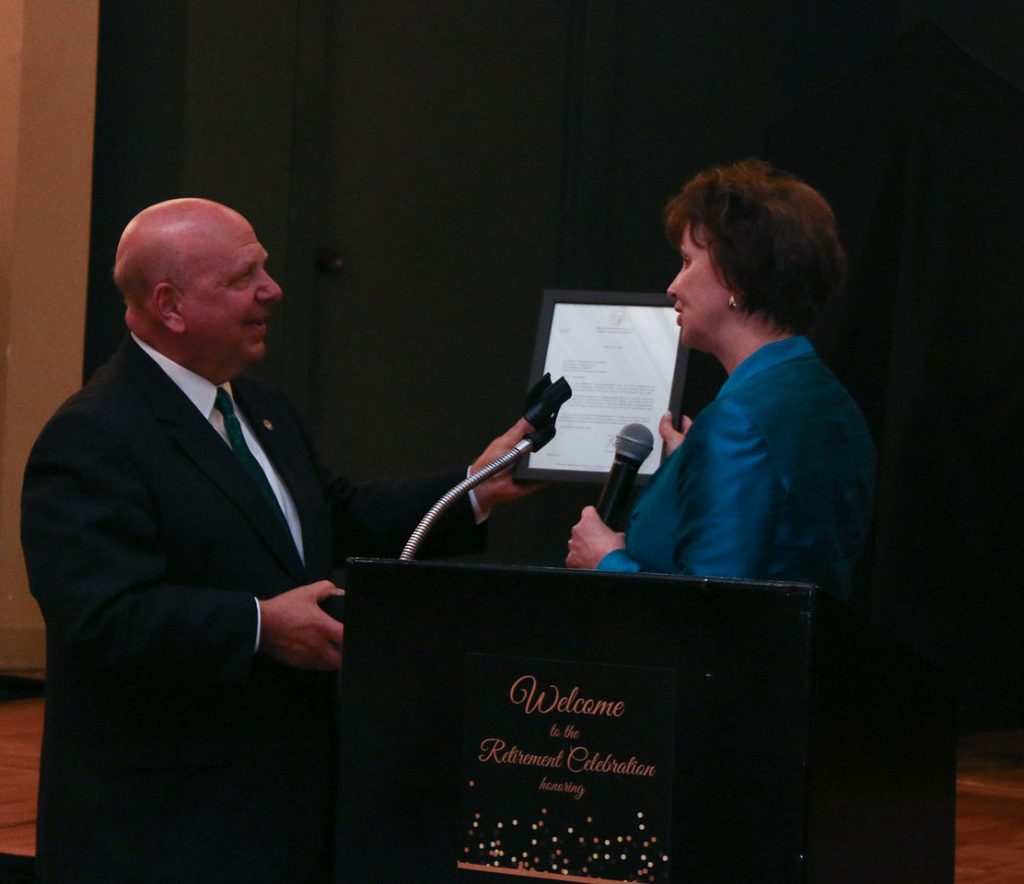 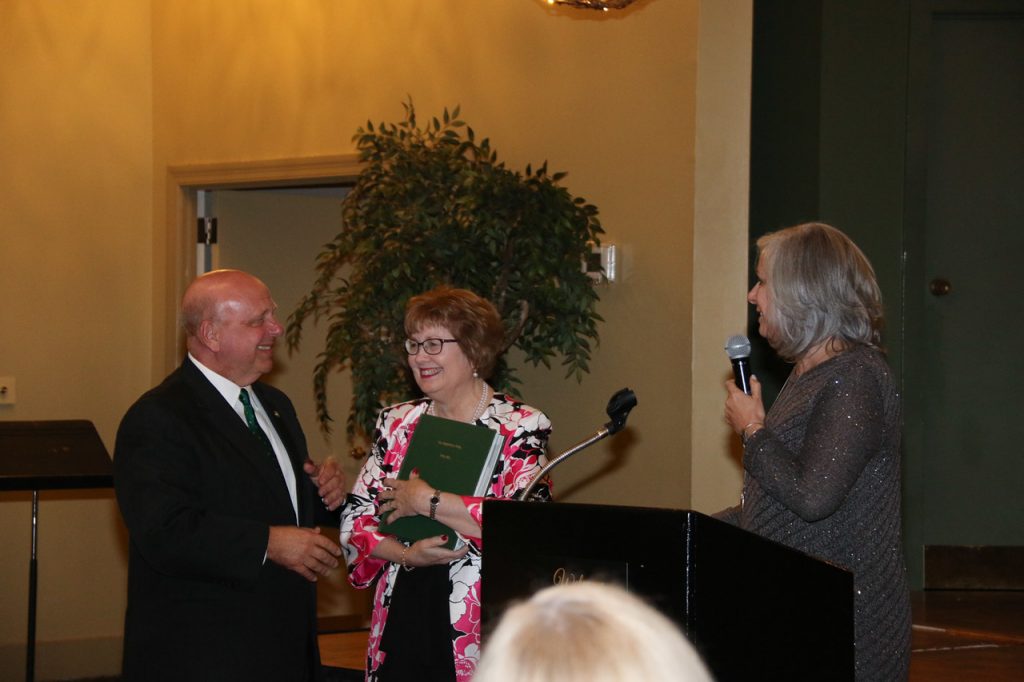 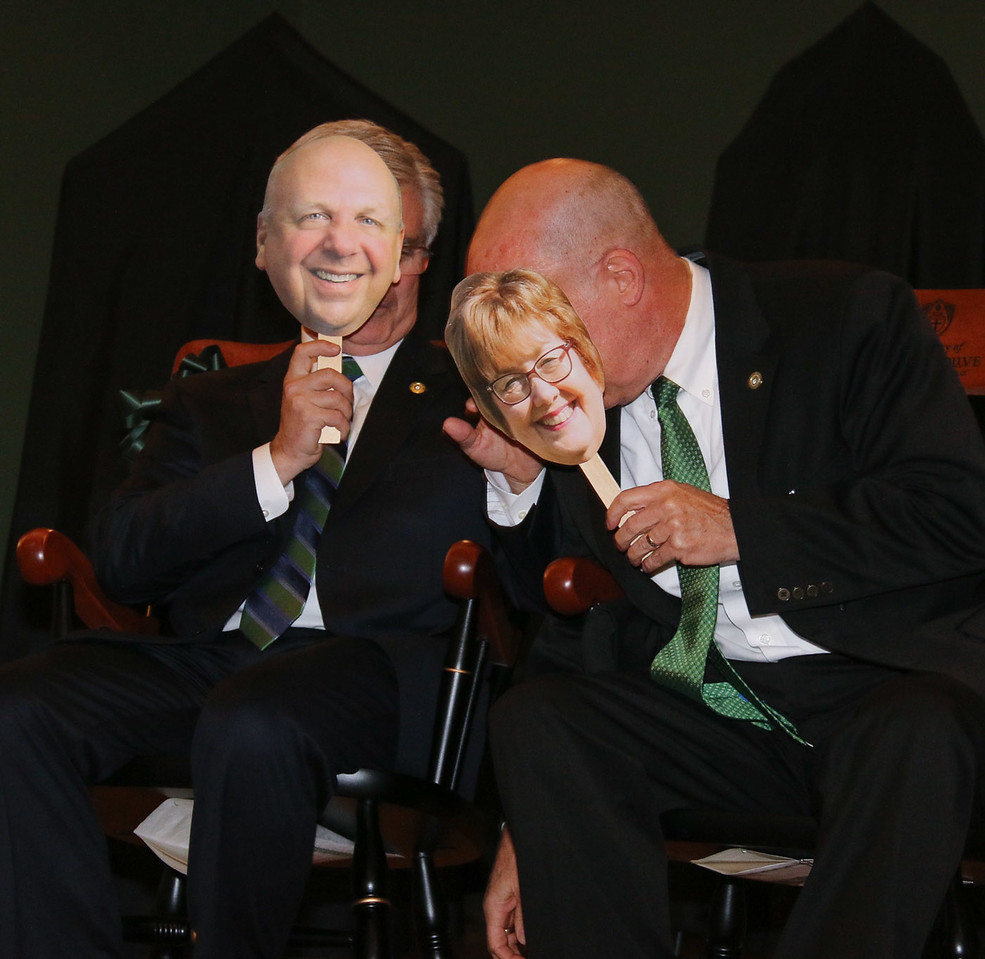