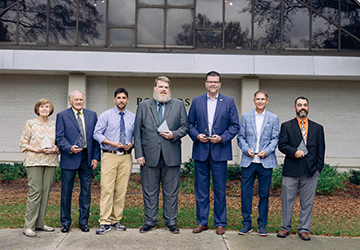 MOUNT OLIVE-The University of Mount Olive (UMO) Alumni Association recently honored seven alumni for their outstanding service, contributions, and achievements.  The awards were presented during the Alumni Awards Ceremony held in Rodgers Chapel.  The event was part of the University’s Annual Homecoming celebration.

Bryan DeBose, from the Class of 2011, received the Dianne Brown Riley Distinguished Service Award.  Debose earned his bachelor’s degree in management and organizational development from UMO and, shortly after, obtained his insurance agent license.  He has worked in the insurance industry in Wilmington ever since.

Having worked in sales most of his adult life, DeBose understands the importance of building and maintaining relationships.  He also believes in the importance of giving back.  He has served on the UMO Alumni Board in several capacities, including Secretary, Vice President, President-Elect, and President.  He has participated in numerous committees, including Homecoming, Winter Glitz, and An Evening with UMO.  DeBose has also contributed financially to projects such as the Track and Field facility and other initiatives.

Debose’s service extends to the community in which he lives.  In Wilmington, he serves as the Loyal Order of the Moose Lodge President and President of the Wilmington Choral Society.

In nominating Debose for the award, a fellow alumnus said, “Bryan contributes time and time again going to events at UMO and serving on the UMO Alumni Board.  He goes beyond the call of duty, and is very deserving of this recognition.”

DeBose, and his wife Sabra, reside in Wilmington.

John Ryan, from the Class of 2015, received the Young Alumni Achievement Award.  Upon graduating from UMO in 2015 with a BA in psychology and a BS in criminal justice and criminology (CJC), Ryan attended Campbell University School of Law, where he obtained his Juris Doctorate.

As a student at UMO, Ryan was very active in the Psychology Club and the Society, Law, and Justice Association (SJLA).  As President of the SJLA, he formed a new division entitled the Future Law and Graduate Student Association (FLAGSA).  This group offers students the opportunity to engage in workshops for personal statement and resume writing, as well as to prepare for the LSATs and GREs.  As a student, Ryan also helped to initiate Mock Trial, which has become an annual competition at the University and one that Ryan continues to oversee.

Professionally Ryan operates a private law practicee in Mount Olive, is the owner of Pizza Village Restaurant, and is an adjunct professor for the UMO Department of CJC & Sociology.

Chair of the Department of CJC & Sociology, Dr. Glenn Coffey, said, “To have a former student take over the role of educator in chief is truly an inspiration.  We are indeed fortunate to have such an outstanding businessperson, academic, and alumnus to serve amongst us at the University.  John possesses a wonderful disposition and is unassuming which makes him approachable and engaging to students and faculty alike.”

Ryan and his wife, Deanna, reside in Mount Olive

Earl Bielby, from the Class of 1967, received the Lifetime Achievement Award.  Bielby, of Pink Hill, earned his associate’s degree from Mount Olive College, now the University of Mount Olive.  From East Carolina University, he earned his BS, MA degree, and Education Specialist degree.  His extensive career in education spans 33 years and covers many facets of education, including teacher, assistant principal, and principal.

His professional service includes a variety of positions on many different education-related committees and organizations.  His community contributions include a great deal of volunteer work with his church, Christian Chapel Original Free Will Baptist Church in Pink Hill.  At Christian Chapel, he currently serves as a Deacon, Sunday School Superintendent, Choir member, lay speaker, and serves on our Life Center Building Committee.  He has also served as a Sunday School Teacher, Trustee Board Member, Vacation Bible School Teacher, Boy Scout Leader, and numerous other positions in ministry. In years past, Bielby has served on the UMO Alumni Board.

His pastor, The Reverend Craig Simmons, said, “Earl is a devout Christian and is never afraid to speak up and share his faith in Jesus.  He is very active in the Gideon Ministry and often shares the Gospel with all ages.  He stands up for what he believes in and is a genuine example of one who has made Jesus Christ their Savior and Lord.”

Fellow alumnus Nancy Yates said, “Earl is one of the finest and most respectful people I know.  He is a great representative of the importance of education and service.”

Michael J Bowen, from the Class of 1983, received the Lorelle F. Martin and Michael R. Pelt Excellence in Teaching Award.  Bowen, of Wilmington, earned his associate’s degree from Mount Olive College, now the University of Mount Olive, his B.A.E. from UNC-Wilmington, and his M.A.Ed. from East Carolina University.

As a tennis coach, Bowen coached the NCHSAA State Championship Tennis Team and received accolades from the USTA in 2015 as the NC Coach of the Year.  In 1991, Bowen received the National Spinal Cord Injury Association Merit Award.

In addition to his many accolades, Bowen is now the author of a biography entitled, The Viewfinder: Michael’s Story.  In his book, Bowen shares his life story, which includes his decision to play an extra in an Arnold Schwarzenegger movie during his senior year of high school.  That decision on November 19, 1985, ultimately led to a car accident, paralysis, and spiritual intervention.  The experience taught Bowen lessons about faith, empathy, and overcoming adversity that he continues to share with others.

In nominating Bowen for the award, fellow alumnus Kermit Nixon said, “As a former student of the late Mrs. Lorelle Martin, I believe that she would say about Michael, ‘Job well done Michael.’”

Earl W. Worley, Jr., from the Class of 1986, received the W. Burkette Raper Leadership Award.  He earned his AS degree and his BS degree in business administration with a concentration in accounting from Mount Olive College, now the University of Mount Olive.  He also attended the University of Colorado at Boulder, Colorado School of Banking.

While at Mount Olive, Worley was a member of the Mount Olive College Singers, where he performed up and down the east coast from New York to Florida.  He was also an active leader on campus, having served as SGA President.  After graduation, Worley returned to Johnston County and used his business degree in office work at Deacon Jones in Smithfield and then at KS Bank.

Worley’s impressive career as a banking executive with KS Bank spans more than 30 years, having held the roles of Loan Officer/Vice President, CFO/Senior Vice President, COO/Executive Vice President, and most recently as CEO/President, a position he was appointed to this year.  Worley’s various roles in the industry have led him to lead, motivate, and implement business objectives that have driven growth, profits, and quality service.

Fellow Alumnus Dianne Riley, who recruited Worley as a student back in 1986, said, “Earl is well respected in his community and profession.  Being an Ambassador for UMO comes easy to Earl, who loves and cares deeply for his alma mater.”

Worley resides in Princeton with his wife, Melissa.  The couple has two adult children, Julie Beth and Will Worley, III.

Hilda Watkins, Class of 1957, received the Alumni Hall of Fame Award.  Watkins graduated from Mount Olive College, now the University of Mount Olive, in 1957 with her associate’s degree.  She earned her bachelor’s degree in early childhood education and her master’s degree in elementary education from East Carolina University.  She taught for 30 years in the public school system, with 27 of those as a kindergarten teacher.  She retired in 1994.

Throughout her life, Watkins has been active in community, civic, and church activities.  She has served many roles at New Hope Baptist Church, including Deacon and Sunday School Class President.  She was a member of the National Education Association, the North Carolina Association of Educators, the Wayne County Unit of NCAE, and the Wayne County Resource Specialist Program.  Watkins has also volunteered extensively with the Hospice of Wake County.

Watkins has been recognized many times for her service to her alma mater and other organizations that have captured her heart.  In 2002, she received UMO Alumni Distinguished Service Award and was named Member Emeritus of the Alumni Board.  In 2002, Watkins served as Reunion Homecoming Chair.

Not only has Watkins given her time, but she has also given her treasures.  A member of the UMO Society since its inception in 2006, Watkins established a scholarship endowment in her son’s name in 1992.

“Hilda has contributed to the University of Mount Olive with her talents, time, and money for a long time,” said fellow alumnus Nancy Westfall.  “She cares deeply about the University.”

Dwayne Bevell, Class of 1997, received the Tillman School of Business Award.  He earned his BS in Criminal Justice from Mount Olive College, now the University of Mount Olive, where he was the president of the Criminal Justice Club and a member of the Mount Olive Singers group, where he met his wife.  Also, during his time at Mount Olive, Bevell volunteered with AmeriCorps through the 4H Cooperative Extension Service.

Dwayne and his wife, Heather, have two boys, ages 12 and 17, who attend Wayne School of Engineering and Charles B. Aycock High School/Wayne Community College, respectively.

After graduating from UMO, Bevell began his career in law enforcement upon completing Basic Law Enforcement Training at Wayne Community College.  He worked at the Goldsboro Police Department from 1998 to 2014, where he held the positions of Police Officer, Training Officer, Patrol Corporal, Property Crime Detective, Special Victims Detective, Juvenile Detective, and Major Crimes Detective.  From 2005 to 2016, he also worked at Wayne Community College, teaching BLET to cadets and conducting in-service training for various law enforcement agencies.

In June of 2015, Bevell departed the Goldsboro Police Department to take over his family’s business, EZ Bait & Tackle, founded by his father, Gary, in 2003.  EZ Bait & Tackle is a family-owned and operated establishment that focuses on community and customer service.  Dwayne wanted his children to have the opportunity to one day take over the store themselves.  Currently, both of his sons work in the store regularly, making up the third generation of EZ Bait & Tackle.

The University of Mount Olive is a private institution rooted in the liberal arts tradition with defining Christian values.  The University is sponsored by the Convention of Original Free Will Baptists.  For more information, visit www.umo.edu. 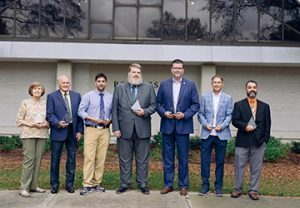